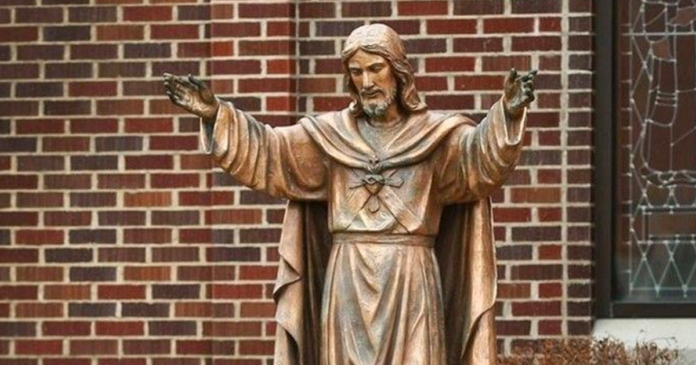 The Calgary Police Service has triggered a hate crime and extremism investigation after a statue of Jesus Christ at the Sacred Heart Church was vandalized by an unidentified man.

Authorities are reporting that on Sept. 1 at 5:30 p.m., a man used a hammer to break off a finger of the statue before fleeing the scene on foot.

Security footage shows him to be about 5’11’’, with a slim build, tattoos on his left arm, an orange T-shirt, ballcap and sunglasses.

Police do not believe that the crime is connected to other instances of vandalism.

“A hate crime is a criminal offence committed against a person or property, which is motivated in whole or part by the suspect’s hate, bias or prejudice towards an identifiable group,” a CPS news release stated.

This is not the first time that the statue was vandalized. Following alleged discoveries of unmarked graves of residential school victims, instances of vandalism and arson targeting Christian churches sprung up across the country.

Nearly 70 churches were vandalized, lit on fire or burned since the Kamloops residential school announcement.

At the time, Prime Minister Justin Trudeau said that the anger towards Christians was “fully understandable.”

“It is real and it’s fully understandable, given the shameful history that we are all becoming more and more aware of and engaging ourselves to do better as Canadians,” said Trudeau at the time.

The prime minister’s remarks were echoed by former principal secretary Gerald Butts who tweeted that the burnings “may be understandable.”