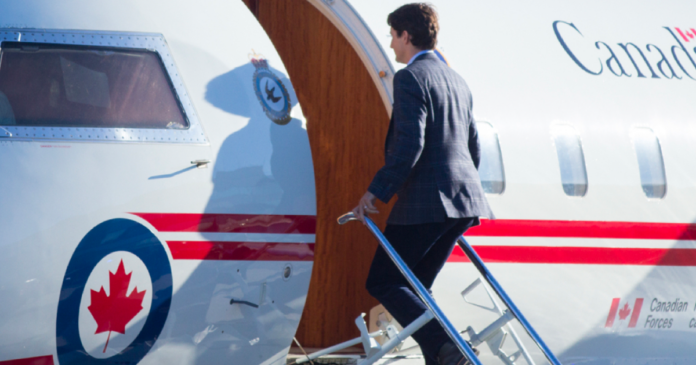 Prime Minister Justin Trudeau has a habit of embarrassing gaffes and statements while on diplomatic trips abroad.

The latest instance included a video of Trudeau singing at a hotel piano in the UK on Saturday prior to the state funeral of Queen Elizabeth II.

Commentators abroad slammed the incident as disrespectful and out of touch with the national grieving happening in the country. Meanwhile, in Canada the legacy media came to the prime minister’s defence.

This is not the first instance in which Trudeau has been ridiculed or blasted for doing something ridiculous internationally. True North has compiled a list of eight times Trudeau has embarrassed Canada abroad and received bad international press for it in the recent past.

In 2018, Trudeau and a delegation consisting of senior members of the Liberal cabinet travelled to India for what was supposed to be a trip to strengthen economic ties between the two countries.

After several appearances by Trudeau in which he was decked out in full Indian cultural attire and seen Bhangra dancing, the trip descended into chaos after convicted terrorist Jaspal Atwal was invited to a state dinner with Indian authorities.

Outlets like the Times of India remarked how the invitation clouded the trip and embarrassed the prime minister.

The condemnation came to a head while Trudeau delivered remarks at the European Parliament a month later when several MEPs condemned the prime minister publicly.

Among them was Croatian MEP Mislav Koalkusic who accused the Liberal government of engaging in a “dictatorship of the worst kind.”

Trudeau was also condemned by UK Conservative MP Marcus Fysh who called on the country’s Foreign Secretary to intervene when Trudeau decided to adopt emergency powers.

Politicians from India, Finland, the US and elsewhere have since also condemned Trudeau over the decision.

Upon the death of Cuban communist dictator Fidel Castro in 2016, prime minister Trudeau publicly praised him as a “remarkable leader.”

“Fidel Castro was a larger than life leader who served his people for almost half a century,” said Trudeau.

“While a controversial figure, both Mr. Castro’s supporters and detractors recognized his tremendous dedication and love for the Cuban people who had a deep and lasting affection for ‘el Comandante.”

Soon after, outlets like the New York Times and The Guardian published articles about the ridicule Trudeau received as a result of the statement.

Castro’s takeover of Cuba is estimated to have led to nearly 11,000 deaths via state-sanctioned murders, disappearances and extra-judicial killings.

Mocked as “little potato” in China

In Sept. 2016, a Canadian delegation led by Trudeau travelled to China to strike a trade deal and rekindle relations between the two countries.

The trip failed to accomplish what it set out to do and the Liberals came back to Canada largely empty handed. While travelling through the country, the prime minister got the nickname “little potato” – a play on Trudeau’s surname and the Mandarin term for potato “tudou.”

Trudeau’s team tried to play the nickname as endearing but instead the prime minister was ridiculed for embracing it.

Since the trip, the nickname has taken on a negative connotation with the Australian Institute of International Affairs deridingly using it to bash Trudeau’s foreign policy in 2019.

Trudeau was accused of sabotaging an imminent Trans-Pacific Partnership trade deal between 11 countries after he didn’t show up to a pre-planned leaders summit in Vietnam.

“The Canadian side said today they are not yet at the stage where its leader can confirm the agreement reached among ministers,” said Abe.

Snubbed at G7 and G20 meetings

While at a G20 summit in 2019, the prime minister’s offer for a handshake was initially snubbed by Brazilian President Jair Bolsonaro. The event was covered by international outlets like The Daily Express.

A video of the incident shows Bolsonaro turning away from Trudeau who is left hanging as the Brazilian president talks to somebody beside him. Eventually, Bolsonaro finishes his conversation and greets Trudeau.

During a prior G20 summit in 2017, Trudeau was also ignored by former US president Donald Trump.

Caught gossiping about Trump on a hot mic

While at a NATO reception at Buckingham Palace, Trudeau was caught on camera gossiping behind former president Trump’s back.

“He was late because he takes a … 40-minute press conference at the top,” Trudeau was heard telling other world leaders.

The comments led to Trump calling Trudeau “two-faced.” This was not the first heated incident between the two world leaders. After a G7 meeting in Quebec in 2018, Trump called the prime minister “very dishonest and weak.” CNN reported on the incident claiming it caused “consternation in Canada.” The Guardian also covered how the meeting was cut short following Trudeau’s hot mic moment.

Siding with Cuba eight times at the UN

Under Prime Minister Trudeau’s watch, Canada has sided with communist Cuba at the United Nations alongside Syria, Iran and North Korea at least on eight different votes.

“My fellow Canadians: these 8 UN votes by Ottawa—breaking with the democratic world—are a stain on our country’s reputation,” said UN Watch founder Hillel Neuer.