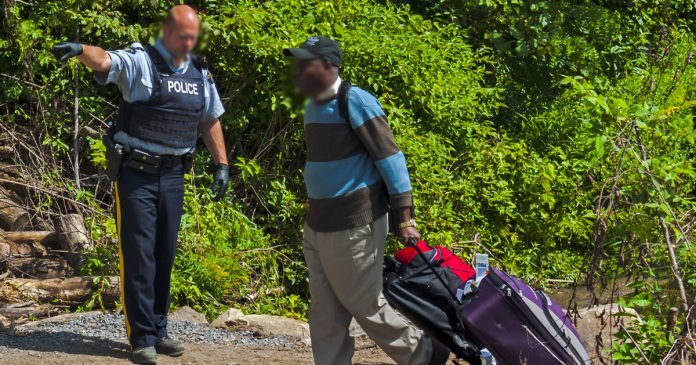 The number of asylum claimants entering Canada illegally at border crossings like Roxham Road reached a six-year high in 2022.

From January to August, RCMP figures showed that 23,358 migrants were encountered at illegal border crossings, 13% higher than in 2017 after Prime Minister Justin Trudeau tweeted that refugees were welcome in Canada and when the federal government first started reporting the data.

Throughout the duration of the pandemic, illegal border crossings fell to their lowest levels in over six years.

As of Nov. 2021, Trudeau reopened Roxham Road to asylum claimants including those who were unvaccinated despite there being a border vaccine mandate in place at the time.

The influx of asylum claimants into Quebec forced the provincial government to call for help from Ottawa.

As a result of the request, the Liberals shipped nearly 2,000 migrants to Ontario.

Taxpayers are also footing the bills to house the incoming asylum claimants while the government looks for more permanent solutions.

During a House of Common immigration committee hearing in May, Immigration and Refugee Minister Sean Fraser was grilled by Bloc MP Alexis Brunelle-Duceppe for having RCMP officers chaperone migrants instead of tackling gun trafficking.

“We have been told that a quarter of the Royal Canadian Mounted Police, or RCMP, officers deployed in Quebec are managing the Roxham Road instead of dealing with gun trafficking at the border,” said Brunelle-Duceppe. “Minister, when will you ensure that the safe third country agreement is suspended?”

“I can reassure people that we’re going to continue to work with our provincial counterparts on things like housing, healthcare and improving our asylum system while we continue to work towards modernizing the safe third country agreement,” said Fraser.

The Canadian government is currently preparing to go to court to defend the Safe Third Country Agreement which outlines obligations the US and Canada have when it comes to accepting refugees across the border.