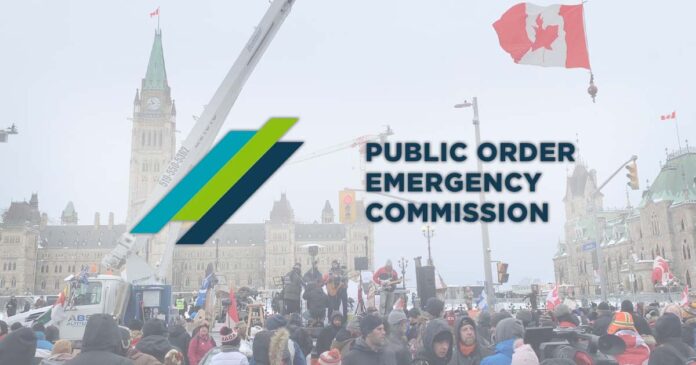 Under questioning from Convoy lawyer Brendan Miller, Windsor mayor Drew Dilkens was presented with a document from the Canadian Security Intelligence Services (CSIS) that indicated that they cautioned Prime Minister Justin Trudeau prior to invoking the never-before-used Act, saying that its invocation would “galvanize” protesters towards violence.

The document states that CSIS officials attended three cabinet meetings prior to the invocation of the Emergencies Act (EA) and that on February 13th – the day prior to invoking the Act – CSIS told cabinet, “the implementation of the EA would likely galvanize the anti-government narratives within the convoy and further the radicalization of some towards violence.”

The document also states that in that same February 13th meeting with cabinet, CSIS advised the government that although invoking the EA would “likely lead to the dispersing of the Ottawa protest”, the invocation would push Canadians to believe that “violence is the only solution to what they perceive as a broken system and government.”

In prior testimony to the Commission, Ontario Provincial Police intelligence chief Pat Morris testified that there was no evidence of violence that had occurred on the part of the protesters throughout the Freedom Convoy, despite multiple acts of violence on the part of law enforcement officials when clearing the Ottawa protest.

Despite this, Public Safety Minister Marco Mendicino accused protesters at a February 16 press conference of committing “acts of violence.” Mendocino even went as far as to accuse the protesters of “threats of rape” toward Ottawa residents before having to walk back his accusations after not being able to present supporting evidence.

Earlier on in the day, Dilkens told Commission lawyers that the City of Windsor didn’t need to use any of the measures in the Emergencies Act to clear the blockades since the Ambassador Bridge was already cleared prior to the government invoking the act.

Protesters in Windsor blockaded the border crossing at the Ambassador Bridge on February 7. The bridge reopened to border crossings the next day, but a blockade on the bridge continued until February 13 – a day prior to Trudeau invoking the Act.

“The (Ambassador Bridge) blockade was cleared and the bridge reopened before the Emergencies Act was invoked, is that right?” a lawyer representing the Commission asked Dilkens.

“The 13th, around midnight, into the 14th I think the bridge opened so the Emergencies Act was invoked on the 14th, so yes. The answer to your question is yes,” the Windsor mayor replied.

“So none of the measures in the Emergencies Act were used to clear the blockades since it came after, correct?” the lawyer asked.

Later on in the afternoon, the Interim Deputy Chief of the Windsor Police Service Jason Crowley reiterated Dilkens’ answers to Commission lawyers by saying that none of the powers in the Emergencies Act were used to clear the Ambassador Bridge blockade.

“Is there anything that the Emergencies Act added to the situation or helped you in any way to clear the blockade?” a Commission lawyer asked Crowley.

“I can’t imagine it didn’t dissuade people from coming back, but that’s just speculation. We did not use the Emergencies Act at all.” Crowley replied.

Meanwhile, a federal judge in Toronto ruled that Ontario Premier Doug Ford shouldn’t be forced to testify at the hearings in front of Commissioner Paul Rouleau In Toronto. Judge Simon Fothergill reasoned that Ford and Deputy Premier Sylvia Jones are granted immunity from taking the stand due to “parliamentary privilege”.

Judge Fothergill wrote, “The privilege provides the premier and minister with a lawful excuse not to comply with the summonses issued by the commissioner on Oc. 24, 2022.”

The Judge however agreed with Commissioner Rouleau’s right to summon the defiant Premier and concluded that Ford and Jones would have valuable information to provide the commission if they chose to testify.

“I am satisfied that the commissioner had jurisdiction to issue the summonses. The matters in respect of which the premier and minister have been called to testify are within the scope of the commissioner’s mandate, and it appears that both witnesses may have valuable evidence to offer.”

Police officers from the OPP, Toronto Police and the Alberta RCMP are scheduled to testify this week along with protesters from the Coutts Border Blockade.