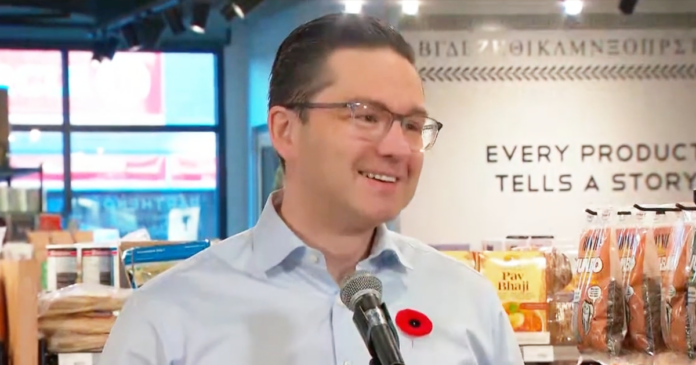 During a stop in Vancouver, Conservative leader Pierre Poilievre reiterated his support for peaceful Freedom Convoy protestors as the inquiry into Prime Minister Justin Trudeau’s use of the Emergencies Act continues to unfold.

While at a Vancouver Greek supermarket on Wednesday, Poilievre held one of his first press conferences since being elected leader of the party in September.

“We have heard extensive testimony at the Emergencies Act inquiry including concerns from police and national security agencies about elements inside the convoy. Has any of this changed your view on whether the Emergencies Act should have been invoked, and if you have known what has been revealed in testimonies so far, would you have still supported the Convoy?” asked a reporter.

“My position is the same as it was before the Convoy arrived, the same as it was during and the same as it is now, which is this: I support those peaceful and law-abiding protesters who demonstrated for their lives and livelihoods and liberties while condemning any individual who broke laws, behaved badly or blockaded critical infrastructure,” responded Poilievre.

Poilievre has been a vocal supporter of the Convoy since it began its journey to Ottawa earlier this year. As protestors arrived in January, Poilievre blasted the legacy media for attempting to paint truckers and their supporters as extremists.

“Well, you know, what I think is interesting is that when there’s a left wing protest on Parliament Hill, we don’t see the Liberal media going through every single name of the people who attend to try and find one person they can disparage the whole group with,” said Poilievre at the time.

Recent testimonies by witnesses before the Public Order Emergency Commission have poked holes in the Liberal government’s justifications for the unprecedented invocation of emergency powers to quash the convoy.

A transcript presented to the Commission on Tuesday of a phone call between Trudeau and Ontario Premier Doug Ford quotes the prime minister insisting that the province didn’t need additional legal tools to break up the movement.

“You shouldn’t need more tools – legal tools – they are barricading the (Ontario) economy and doing millions of damage a day,” Trudeau told Ford during the Feb. 9 phone call.