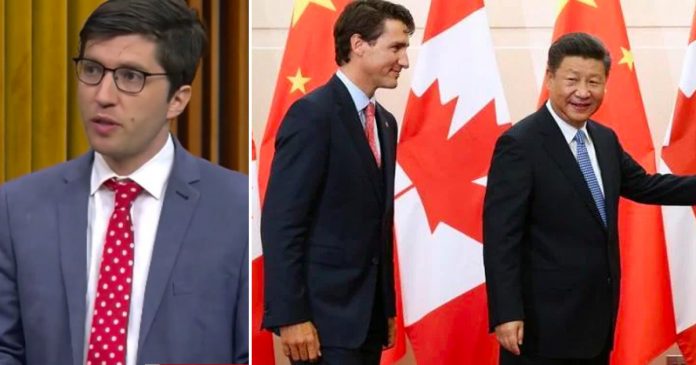 Conservative MP Garnett Genuis blasted the Liberal government over a report by the Canadian Security Intelligence Service that found at least 11 candidates received Chinese cash in the last federal election.

In response to the Liberals refusing to disclose which candidates received the approximately $250,000 in funding, Genuis claimed the Liberals were the ones benefiting from Beijing’s interference.

“Why have the Liberals spent years ignoring foreing interference? Because they benefit from it. Liberals’ weak foreign policy and failure to stand up for justice has led human rights abusers to want Liberals to stay in power.”

Genuis also referenced former Liberal MP and ambassador to China John McCallum who in 2019 told Chinese media that a Conservative election victory that year would be a disadvantage to Chinese interests. McCallum was fired from his post for controversial statements.

During the 2021 federal election, Chinese state media also warned that Canada could face “counterstrikes” should the Conservatives have won that election.

On Monday MPs with the Commons procedure and house affairs committee voted to initiate a prove into the allegations of a “vast campaign of foreign interference.”

“No one has been expelled from Canada, no one has been charged. There have been no apparent investigations undertaken and there has been no action taken on the part of the government to respond legislatively,” said Conservative MP and committee member Michael Cooper.

“This interference is simply intolerable. It is unacceptable.”

Chiu lost his seat during the general election last year after facing an online assault he alleges was directed by China.