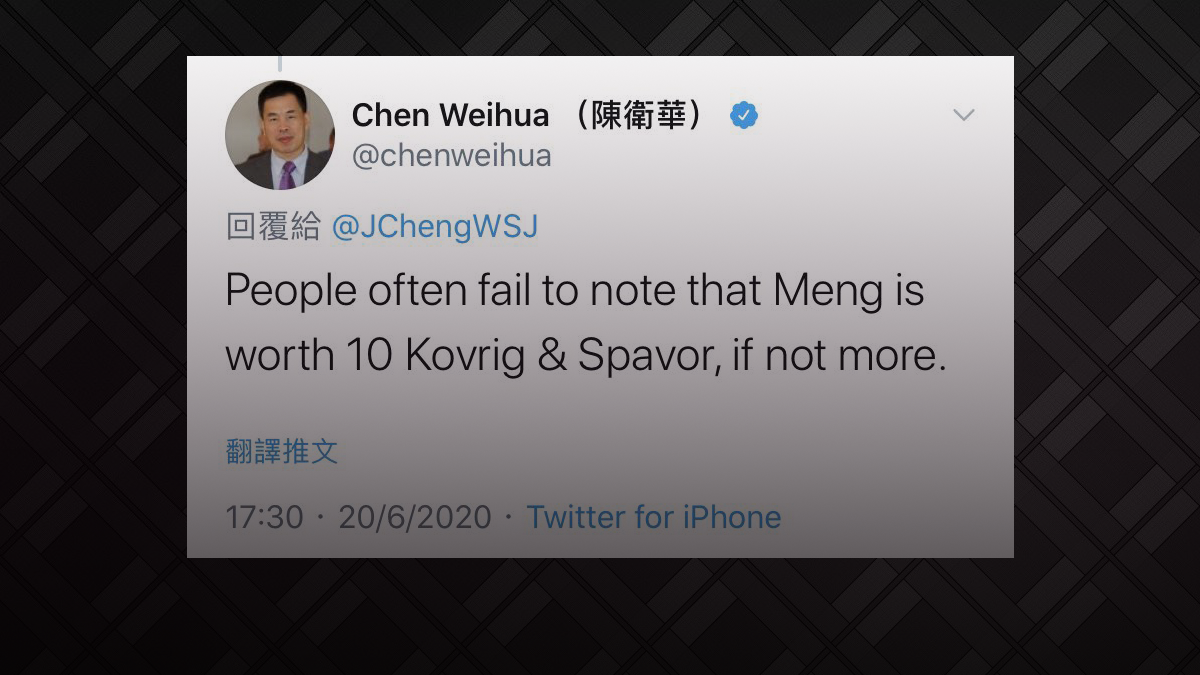 A journalist with the state-owned China Daily newspaper tweeted that Huawei CFO Meng Wanzhou was worth 10 imprisoned Michael Kovrigs and Michael Spavors.

“People often fail to note that Meng is worth 10 Kovrig & Spavor, if not more,” tweeted Chen Weihua, who is the European Union bureau chief for the paper. Chen’s tweet has since been deleted from the social media platform.

The China Daily is an English-language propaganda publication owned by the Publicity Department of the Communist Party of China.

Chen’s comments come days after China launched formal charges against the two Canadians who have now been held in Chinese prisons for over 500 days.

Many see China’s unlawful detainment of the pair as retaliation for Canada’s arrest of Meng, who is wanted by US authorities for wire and bank fraud charges related to her alleged circumvention of sanctions on Iran.

A BC Supreme Court judge recently ruled that Meng’s case passes the double criminality requirement and that her extradition proceedings can move forward.

Yesterday, the US State Department issued a harsh statement condemning China’s imprisonment of Kovrig and Spavor.

“These charges are politically motivated and completely groundless. The United States stands with Canada in calling on Beijing for the immediate release of the two men and rejects the use of these unjustified detentions to coerce Canada,” wrote Secretary of State Mike Pompeo.

“Additionally, we echo Canada’s call for immediate consular access to its two citizens, in accordance with the Vienna Convention on Consular Relations, as China has prohibited such access for almost six months, and the world has no knowledge of the two Canadians’ condition.”

While the two Canadians are being denied consular visits, Meng has been under house arrest in one of her Vancouver-area mansions.

To mark the one-year anniversary of her arrest, Meng issued a public letter complaining about her conditions while at home and the fact that she gets to read books “from cover to cover.”

“Right now, time seems to pass slowly. It is so slow that I have enough time to read a book from cover to cover. I can take the time to discuss minutiae with my colleagues or to carefully complete an oil painting,” wrote Meng at the time.

Yesterday, Prime Minister Justin Trudeau called the arrests of Spavor and Kovrig “political” and stated that the communist state’s actions were unacceptable.

“This using of arbitrary detentions as a means to advance political gains is something that is fully unacceptable in a world based on rules,” said Trudeau.