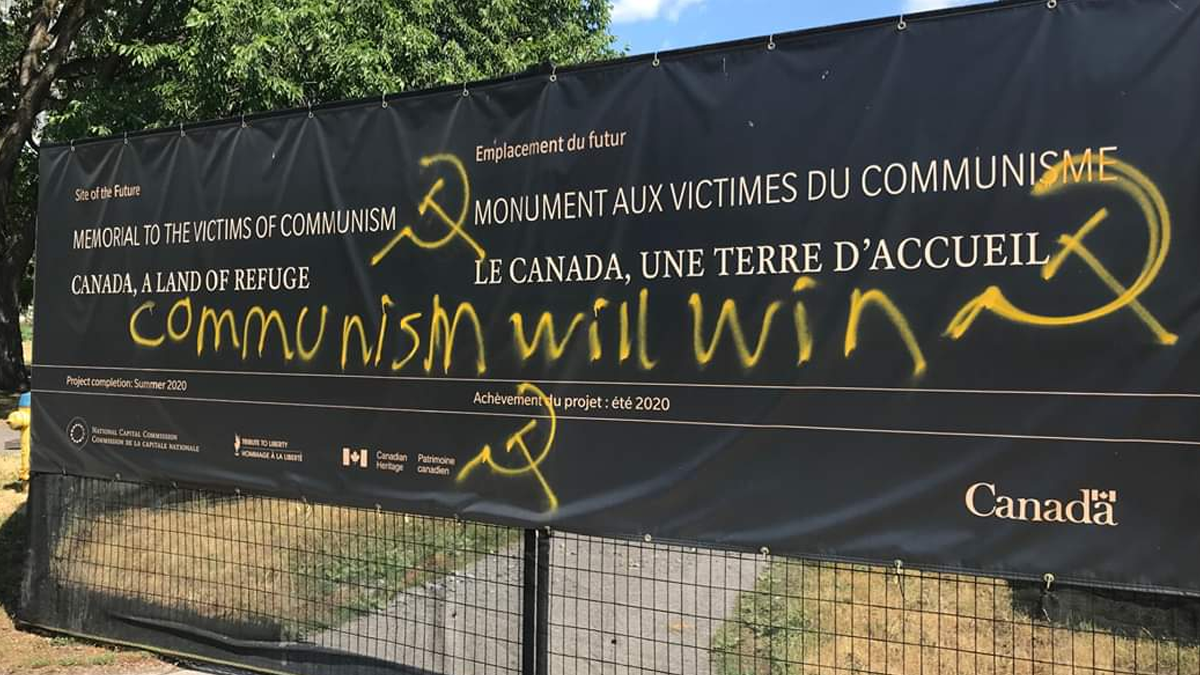 The site of Canada’s Memorial to the Victims of Communism has been vandalized.

On Sunday, the Ukrainian Canadian Congress tweeted a picture of the entrance to the memorial. Across the memorial’s sign vandals spray-painted the phrase “communism will win” with several communist symbols.

The $3 million memorial is currently under construction. When completed it will cover around 500 square meters. The monument is dedicated to those who suffered under communist regimes.

Tribute to Liberty, the charity that partnered with the federal government to create the memorial, strongly condemned the vandalism of their project.

“Communism always fails. Communism kills but also gives birth to plentiful numbers of the useful idiots in Canada and beyond,” they wrote.

“The Memorial isn’t completed yet but that didn’t stop some moron from insulting the memory of our heroes on Canada Day.”

Communism is among the deadliest ideologies ever implemented, with well over 100 million deaths in the past 100 years as a result of communist policies.

Between 1932-1933, 7-10 million Ukrainians died of starvation as a result of famine orchestrated by the Soviet Union. This event, known as Holodomor, is considered a genocide by many countries, including Canada.

Between 1958-1962 at least 45 million people died in China as a result of the “Great Leap Forward,” a modernization program organized by China’s communist regime.

While the Harper government originally planned for the memorial to be built beside the Supreme Court, the Liberal government moved the site to a much less prominent location in 2015.

Under Trudeau, the memorial was also redesigned to put more emphasis on the story of refugees coming to Canada from communist states.

The Memorial to the Victims of Communism is expected to remain under construction for a few more months. Tribute to Liberty says that the unveiling of the memorial will occur in the fall.