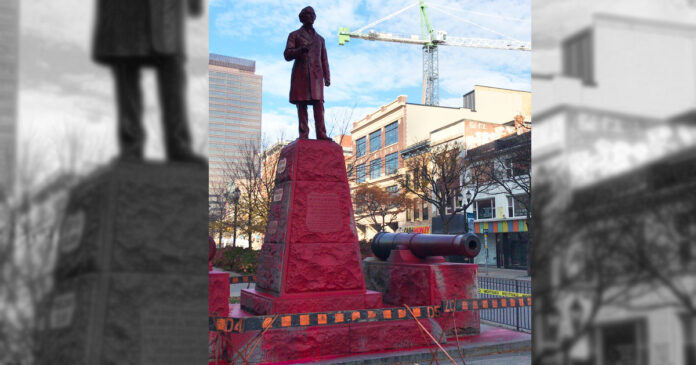 A statue of Canada’s first prime minister and the founder of Confederation was vandalized at Gore Park in Hamilton on Monday.

Hamilton Police are investigating the incident after they received a call in the early hours of the morning regarding a “mischief” incident involving the statue.

“It is very early in the investigation and we are working to identify those responsible for this crime and to bring them forward to answer for their actions,” Hamilton Police media relations officer Jerome Stewart told CBC News.

The Sir John A. Macdonald monument was covered in paint and the ground in front of the statue was marked with the words “Land Back,” a reference to Indigenous rights movements.

Cleaners moved into the area and the statue was mostly cleared by Monday afternoon.

In August, a similar statue in Montreal was toppled and decapitated by far-left activists while police officers stood by.

“We are a country of laws, and we are a country that needs to respect those laws even as we seek to improve and change them,” said Prime Minister Justin Trudeau about the incident.

Similarly, in September city officials with the Ontario township of Baden quietly removed a statue of Macdonald from its pedestal in the early hours of the morning in the interest of “reconciliation.”

According to the town, the statue was stored into an undisclosed storage facility while officials determine what to do with it.

Polls show that a  majority of Canadians are opposed to activists vandalizing and removing statues of historical Canadian figures.

A poll conducted by Ipsos showed that 74% of Canadians disagreed with the actions of protesters who topple monuments, while only 26% of people agreed with them.

Singing O Canada is “distasteful and should be replaced”: OCDSB committee

Singing O Canada is “distasteful and should be replaced”: OCDSB committee

BC museum closes floor on Canadian history to “decolonize” exhibit

Liberals refuse to raise Canadian flag so it can be lowered...