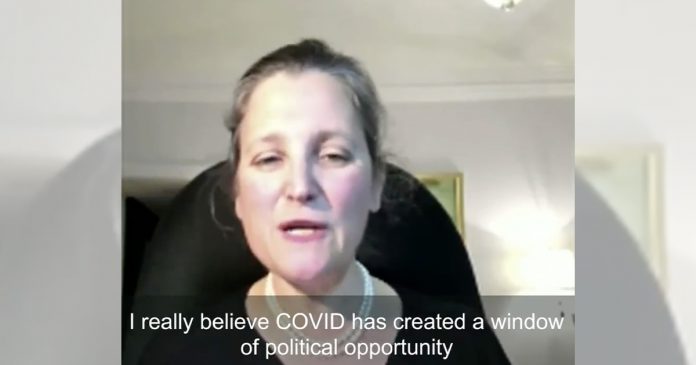 “I really believe COVID has created a window of political opportunity and maybe an epiphany,” Freeland says in the 11-second video, posted by an anonymous Twitter account.

Freeland’s office did not respond to True North’s request for a transcript of her full remarks or details about the context of them, but a CBC News reporter said the comments were made in the context of a discussion on early learning and child care.

Freeland’s language mimics a previous statement from Prime Minister Justin Trudeau touting the “opportunity for a reset” that the pandemic provided governments.

“This pandemic has provided an opportunity for a reset. This is our chance to accelerate our pre-pandemic efforts to reimagine economic systems..” said Trudeau.

“The time to rebuild trust and to make crucial choices is fast approaching as the need to reset priorities and the urgency to reform systems grow stronger around the world,” the World Economic Forum said at the time.

Critics have accused the Liberals of politicizing the pandemic and resulting economic consequences in order to push through long held Liberal positions on climate change and other issues.

“To me the Great Reset, the big problem with it is that it’s ignoring the key lessons of the 20th century while simultaneously seeking to erase the gains of that century. The phrase the ‘Great Reset,’ good heavens, it sounds like Mao’s Great Leap Forward. It sounds like those five year planning things that Stalin came up with and those didn’t end too well,” said Furey.