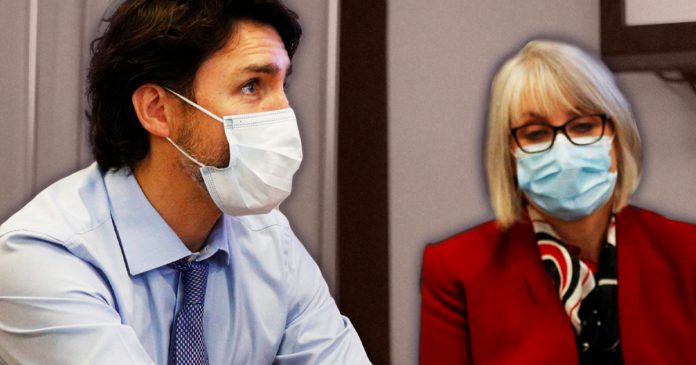 The Trudeau government has regularly dismissed any criticism as “fake news,” “disinformation” and “conspiracy theories.”

Over the course of the pandemic, the Liberals have waved away real concerns Canadians harbour about vaccine distribution, economic recovery and even going so far as brushing aside official government COVID-19 data.

A True North review found the most egregious instances where the Liberals have shut down the concerns of Canadians through name-calling and false accusations.

Health Minister Patty Hajdu claimed that research into Vitamin D protection against COVID-19 was “fake news” in response to a question by Independent MP Derek Sloan on why Health Canada was not recommending Canadians take the supplement as a preventative measure against COVID-19 despite studies showing its effectiveness.

“I would encourage the member opposite to not fall prey to the myriad of fake news articles that are circulating around the internet about ways that people can protect themselves from COVID and trust that the Public Health Agency of Canada only puts science-based credible documents up guided, of course, by our Chief Public Health Officer Dr. Tam and the many scientists that work for us,” said Hajdu.

The Conservative Parliamentary leadership team is waging an ideological battle, under the disguise of respecting the House, truth is they are just trying to sling mud… this is their lead finance critic yesterday…. really… conspiracy theories… I can do better!…/4 pic.twitter.com/CA4k9YqF5I

Liberal MP Adam Vaughan took to Twitter to decry a post by Conservative MP Pierre Poilievre about Prime Minister Justin Trudeau’s new $2.5 million luxurious lakeside mansion and claimed that it was a conspiracy theory despite it being confirmed by the National Capital Commision.

“The Conservative Parliamentary leadership team is waging an ideological battle, under the disguise of respecting the House, truth is they are just trying to sling mud… this is their lead finance critic yesterday…. really… conspiracy theories… I can do better!” said Vaughan in response to an aerial photograph showing the new construction on the Harrington Lake property.

When asked by the leader of the Bloc Quebecois if Pfizer was seeking preferential treatment from the Liberal government after the company asked for new tax breaks in the next budget, Prime Minister Justin Trudeau implied that the article was a conspiracy theory.

“Mr. Speaker, the good news is that we negotiated several contracts with different companies just in case there were interruptions with any of them. That is the good news. Our plan heading into negotiations was solid,” said Trudeau.

“Unfortunately, the leader of the Bloc Québécois is once again hinting at conspiracy theories behind various issues.”

4. December 8, 2020: Lamoureux says WE Charity scandal is a conspiracy

During Question Period, Liberal MP Kevin Lamoureoux implied the federal government’s WE Charity scandal was a “made-up” conspiracy pushed by the Conservative Party.

“They are calling for civil servant after civil servant to go before the committee. I think my colleagues did a good job of ensuring that this government continues, even though the opposition continues to look for made-up conspiracies, in some cases. We continue to be focused on the coronavirus. That has been clearly demonstrated. While Conservatives would rather have civil servants answering questions about conspiracy, we prefer civil servants doing what they do best, which is serving Canadians by minimizing the negative damage of the coronavirus,” said Lamoureux.

“Mr. Speaker, we have every day and in fact we are briefing Canadians now every week on the process and on the progress of our distribution and logistics effort. There will be more news on that today,” said MacKinnon.

“These conspiracy theories keep coming from the opposition over there. They have always been a little fuzzy on science over there. I am giving an occasion to stand up, once and for all, and express, on behalf of that party, confidence in the Health Canada regulators, the science of vaccines and that the end of this pandemic will be brought about as a result of the efforts of this Liberal government.”

In response to a question by Conservative MP Michelle Rempel Garner to apologize to the families of COVID-19 victims, Health Minister Patty Hajdu claimed a Toronto Sun column on official government data by Anthony Furey was “fake and dangerous news.”

“Mr. Speaker, do you know what will help Canadians’ lives? If the member opposite and the leader of the opposition stop their members from sharing fake and dangerous news like the member from Lethridge and the member of Carleton stay focused on saving lives of Canadians instead of spreading conspiracy theories,” said Hajdu.

7. November 20, 2020: Trudeau calls Great Reset “disinformation” after calling for a “reset” himself

During a press conference last year, Prime Minister Justin Trudeau addressed concerns involving using the COVID-19 crisis for a “Great Reset” of the global economy. Trudeau dismissed the concerns as “disinformation” and “conspiracy theories” despite using the term himself during a speech at the UN only a few months prior. Additionally, earlier this year two of his ministers took part in a “Great Reset Initiative” event at the World Economic Forum.

“I think we are in a time of anxiety where people are looking for reasons for things that are happening to them. That (in) the difficult moments we’re in, it’s nice to find someone to blame, something to point to, something to get mad at,” said Trudeau.

“I think we’re seeing a lot of people fall prey to disinformation and if Conservative MPs and others want to talk about conspiracy theories, well that’s their choice, I’m going to stay focused on helping Canadians get through this.”

Responding to a question at the government’s daily coronavirus briefing, Health Minister Patty Hajdu downplayed concerns that China’s numbers were inaccurate, even going so far as to accuse the reporter who asked about them of “feeding conspiracy theories.”

“There’s no indication that the data that came out of China in terms of their infection rate and their death rate was falsified any way,” said Hajdu.

This came on the heels of a Bloomberg report that the U.S. intelligence community found evidence China purposefully hid and falsified their coronavirus case data.

Following a report by the Globe and Mail which revealed the Prime Minister’s Office attempted to get the former justice minister to scrap an ongoing prosecution of SNC-Lavalin, Justin Trudeau dismissed the report as “false.”

“The allegations in the story this morning are false,” Trudeau told reporters.

“Neither the current nor the previous attorney general was ever directed by me nor anyone in my office to take a decision in this matter.”

In the months to follow, it was revealed that the Globe and Mail report was in fact accurate. The SNC-Lavalin scandal led to the resignation of a number of Liberal MPs and Trudeau’s top advisor and another ethics violation by Trudeau.

Dion said Trudeau used his position of authority over former Attorney General Jody Wilson-Raybould to seek to influence her decision on whether she should overrule the Director of Public Prosecutions’ decision on SNC-Lavalin.

In 2018, while a number of provinces pushed back against the federal government’s carbon tax, Conservative MPs shared an opinion column by True North’s Candice Malcolm, in which Malcolm used facts and data to criticize the tax.

“Every taxpayer in the country, and especially every conservative who believes in the principle of limited government, should do everything they can to stop this devastating tax grab,” Malcolm wrote.

“Unbelievable. Conservatives calling a price on pollution as the fight of their lives. How about join Canadians and fight for clean innovation and a healthy planet for our kids! And stop with the fake news. No tax grab. All money will stay in the province where it’s collected,” McKenna tweeted.