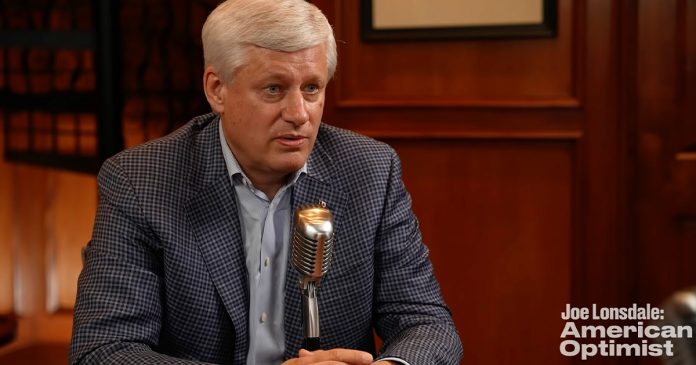 “What’s so threatening about…the far woke left,” according to Harper, is that “its goal is authoritarianism.”

Harper connected the behaviour of the modern left to the totalitarianism at the root of Marx and Engels. Marx’s view was that his “opinions were not opinions, they were science… Therefore, since you’re arguing against facts, you get to the Soviet mentality that all dissent is essentially a mental illness or something that needs to be reeducated and corrected.”

This is a startling trend in today’s COVID-era, as activists and politicians have dismissed serious concerns about government-mandated lockdowns and questionable public health orders. The Trudeau government has often dismissed its critics by accusing them of spreading “misinformation” and “conspiracy theories.”

Regarding Canada’s COVID-19 response, Harper said, “this is bad macroeconomic policy on an enormous scale” and that the government reaction has “been overkill.” Harper expressed concern over consumer inflation, asset inflation, bubbles and the inevitable interest rate hikes which will impact investment.

Sooner or later, he said, Canadians will come to realize that all of this supposed “affordable government spending is not so affordable.”

Canada’s federal debt surpassed $1 trillion dollars this year following a frenzy of pandemic spending by the ruling Liberal government. Further, in its latest budget, the government revealed a whopping deficit of $354 billion with no plan to pay down the debt and balance the books.

Harper is hardly the first to criticize the Liberal spending throughout the COVID-19 pandemic. Economists from the Fraser Institute released a study in June 2020 saying that “stimulus spending will likely harm Canadian economy—not help it.”

Harper struck at the root of the issue, saying that “what’s happening right now… [is that these] bastardized Keynesian fiscal policy guys or modern monetary theorists [are] trying to convince the population that the fundamental principle of economic science is untrue.”

Harper goes on to discuss the problems of globalization: “At the end of the cold war, all common sense on economic interaction related to national security went out the window, and we just assumed everybody … is going to be a friend … so we can trust them with anything. That has to change.”

One of the most criticized aspects of Canada’s COVID-19 pandemic response has been the Liberal government’s trust in China. While multiple countries were developing vaccines, the Canadian government chose to only pre-order doses from CanSino Biologics. The government even sent the company a cash advance for vaccines that were never delivered to Canada.

According to Harper, we must ensure our supply chains do not depend on unreliable countries and that “we have redundancy in terms of sources of supply.”

Despite his concerns, Harper believes that Canada has a “great future.” Still, Canadians must realize that “the adolescent ego of the woke university crowd is not an alternative governing philosophy for any society.”