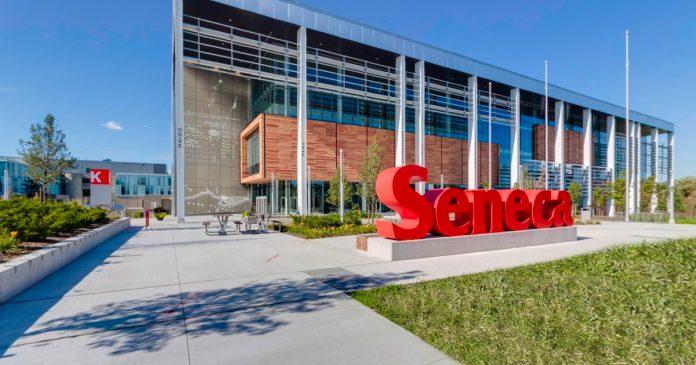 The Justice Centre for Constitutional Freedoms (JCCF) has filed a lawsuit against Seneca College in Toronto on behalf of four students who are not permitted to return to campus unless they get COVID-19 shots.

“Seneca College has violated these students’ rights of conscience, bodily autonomy, privacy and has discriminated against them based on their medical status,” states JCCF constitutional lawyer Allison Pejovic on Tuesday. “The college has also broken its contract with the students, causing them financial hardship and severe stress.”

The JCCF’s press release said these students have chosen not to take a vaccine at this time and that a court date is coming soon.

Seneca College was the first post-secondary institution in Canada to require all students and staff coming to campus to be vaccinated.

The JCCF is representing four Seneca students including Mariana Costa (a third-year fashion arts student), Crystal Love (a second-year veterinary technician student), Alexandra Badowich (a fourth-year crime and intelligence student) and Angelina Mandekic (a second-year practical nursing student). All four were expected to complete their programs and begin their careers in April.

Love is a single mother who has been working to provide a better life for her kids, according to the JCCF. They said Badowich is having a baby later this year and was blocked by Seneca from attending a one-hour administrative meeting for her work placement, despite her internship being online.

The JCCF wrote letters on behalf of Costa and Love in July 2021, threatening Seneca with legal action if they did not lift the vaccine requirement. According to the press release, these letters never received responses.

The JCCF added that none of the students can complete their programs online, which will leave them struggling to pay back their student loans. They said these students have employment in lower-paying jobs than the careers they were expected to begin in April.

“They are devastated that they will not be able to commence their new careers this April as they had planned,” said Pejovic.

The JCCF had announced in August 2021 that they would be suing Seneca on behalf of Costa and Love for the college’s mandatory vaccine policy. The organization said the policy is stopping students from completing their education and is “unlawful and unethical.”

Seneca could not be reached for comment in time for publication.