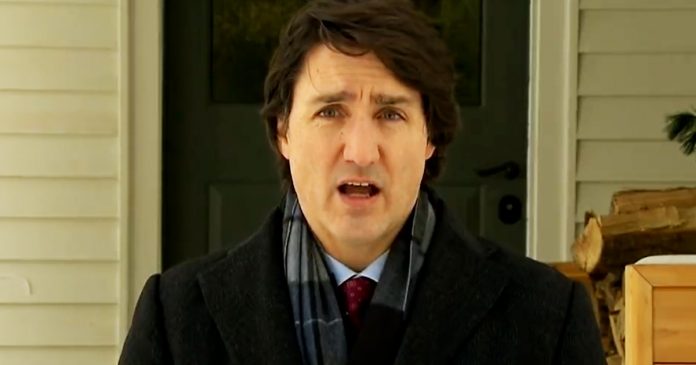 Prime Minister Justin Trudeau emerged from a secure location on Monday to denounce the thousands of truckers and their supporters rallying in Ottawa as “tinfoil hats” whose behaviour has disgusted him.

“And to Canadians at home,” Trudeau said, “watching in disgust and disbelief at this behaviour, wondering how this could have happened in our nation’s capital after everything we’ve been through together – this is not the story of our pandemic, of our country, of our people.”

During his remarks, Trudeau referred to “hateful rhetoric,” “Nazi symbolism” and “racist imagery” to characterize the convoy, despite no arrests during the weekend rallies and worldwide support that has united Canadians.

“I know you’re wondering about what you saw in our capital this weekend,” Trudeau read to the camera from a prepared statement. “Freedom of expression, assembly and association are cornerstones of democracy, but Nazi symbolism, racist imagery, and desecration of war memorials are not.”

The comments marked Trudeau’s first public appearance since going into isolation from a reported COVID exposure on Friday, being whisked away due to “security concerns” on Saturday and isolating for a positive COVID test on Monday.

Trudeau, who contracted the virus despite getting his third shot on Jan. 4, also reiterated that “the way out is not protesting the pandemic, it’s getting vaccinated.”

“Over the past few days, Canadians were shocked and frankly disgusted by the behaviour displayed by some people protesting in our nation’s capital. I want to be very clear – we are not intimidated by those who hurl insults and abuse at small business workers and steal food from the homeless. We won’t give in to those who fly racist flags; we won’t cave to those who engage in vandalism or dishonour the memory of our Veterans.”

He then reminded Canadians to reject division and hatred.

Speaking to truckers who aren’t taking part in the massive convoy in Ottawa and protests in other cities across Canada, Trudeau said, “(a)lmost 90% of you are doing exactly that (getting the shots) and we thank you, deeply, for everything you’ve done. The behaviour on display this weekend does not represent you.”

Trudeau also took questions from pre-approved members of the legacy media, including one about reports of vaccine injury being shared by some protesters.

Trudeau responded that vaccines are safe, saying, “the concerns expressed by a few people gathered in Ottawa right now are not new, not surprising, are heard, but are a continuation of what we have unfortunately seen in disinformation and misinformation online – conspiracy theorists about microchips, about God knows what else that go with the tinfoil hats.”

“While this fringe minority is protesting, the vast majority of Canadians are thinking, ‘come on, it’s by continuing to be there for each other that we will get through this pandemic.’ We all want to be done with this pandemic, but the vast majority of Canadians know very well that the way out is not protesting the pandemic, it’s getting vaccinated.”

When asked whether he would meet with the convoy organizers, as he did with the Black Lives Matter rally leaders in June of 2020, Trudeau said no.

“I have attended protests and rallies in the past when I agreed with the goals, when I supported the people expressing their concerns and their issues. Black Lives Matter is an excellent example of that,” said Trudeau, who has repeatedly worn blackface and various ethnic outfits over the past decades.

“But I have also chosen not to go anywhere near protests that have expressed hateful rhetoric, violence towards fellow citizens, and a disrespect not just of science but of frontline health workers.”

“My choice is to continue to be there for the 90% of Canadians who are fed up with this pandemic, but who know the way out of it is by standing in solidarity with each other, showing respect for each other and following public health advice.”

Despite Trudeau’s accusations, Freedom Convoy organizers have made it clear they had nothing to do with alleged extremist behaviour at the weekend rally, including a brief display of two hateful flags whose bearers remain unknown.

The allegations came as part of a week-long campaign by left-wing politicians and legacy media to pre-emptively defame the convoy, for which organizers urged participants to be highly cautious.

Organizers Tamara Lich – an Albertan Métis woman – and Benjamin Dichter – a Jewish Torontonian – have said they are not anti-vaccine. Rather, they have said, the protest is about bringing an end to COVID restrictions in Canada, including forced vaccination through government mandates.

The organizers have said they will stay in Ottawa until Trudeau meets their demands.