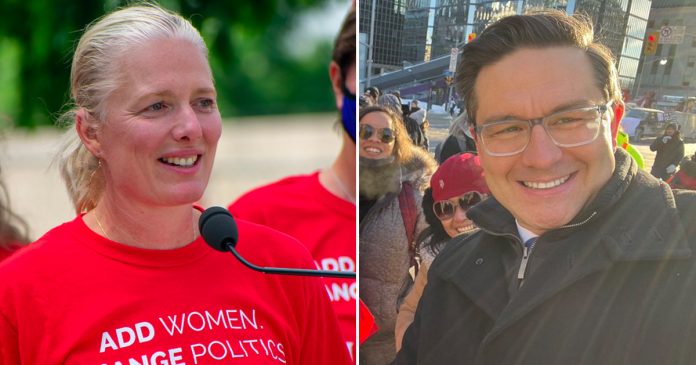 Conservative MP Pierre Poilievre is defending himself against former Liberal cabinet minister Catherine McKenna, who on Monday accused him of standing with “folks with swastikas & confederate flags who beat up homeless (and) denigrated memorials.”

McKenna, who served as a cabinet minister in two different roles under Trudeau before retiring before the 2021 election, made the comments while retweeting a video from Saturday of Poilievre speaking with Freedom Convoy supporters on an overpass.

Poilievre has shown heavy support for the convoy in the last week, even telling legacy media reporters on Thursday that truckers “have kept all of you alive for the past two years.”

Poilievre repudiated McKenna’s accusations with similarly blunt language, saying “(y)ou are a liar Ms. McKenna. I stood with no such flags.”

Poilievre also accused McKenna of hypocrisy for supporting Trudeau – “a man who dressed up in racist costumes so often he lost count and targeted & expelled racial minorities in his own caucus because they would not fall in line.”

McKenna’s comments reflect a continuing campaign by left-wing politicians and legacy media to disparage the Freedom Convoy as a violent extremists despite the peacefulness of the protest and the unknown identities of a few bad actors.

The video that McKenna retweeted did not show Poilievre with any of the flags or people mentioned in her tweet, nor has any evidence emerged to corroborate her claims.

Poilievre went on to tweet a condemnation of those flying nazi flags, confederate flags, and defacing monuments, while making the point that these outliers “do not represent the thousands of lawful truckers who are actually part of the protest and are peacefully championing their livelihoods & freedoms.”

During Question Period on Monday, Poilievre continued to call out the Liberals for their hypocrisy regarding the use of hateful flags being flown at demonstrations, bringing up Justin Trudeau’s history of wearing blackface, as well as his once telling a man flying a swastika at a rally, “thank you for coming, sir.”

Poilievre said that not all Liberals are considered racists because of Trudeau’s actions, and  capped his speech off by saying, “we on this side condemn evil symbols whenever they are used.”

Since posting her tweet, McKenna has faced immense criticism. One Twitter user disputed its claims and explained the importance of MPs listening to their constituents.

I only see Canada flags in this picture. As an MP his job is to listen to ALL voices not just the ones the liberals agree with

Another user had scathing remarks to share regarding McKenna’s honesty.

You just couldn't care less about being honest, could you?

True North reached out to McKenna for comment but has yet to receive a reply.