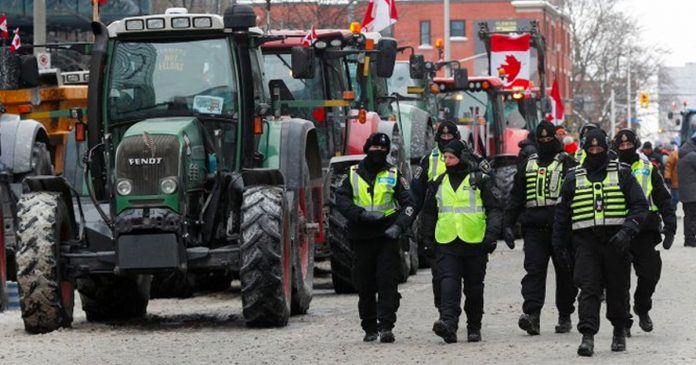 The Ottawa Police Service (OPS) has ordered people participating in the Freedom Convoy to exit the city or risk being arrested.

The OPS also announced Wednesday that the federal government’s Emergencies Act allows travel to be regulated in a particular area, adding that anyone who comes to Ottawa to protest is now breaking the law.

“Anyone blocking streets, or assisting others in the blocking of streets, are committing a criminal offence and …may be arrested,” said the OPS in a press release.

“You must immediately cease further unlawful activity or you will face charges.”

The OPS claimed that Ottawa residents are “being denied the lawful use, enjoyment and operation of their property and … are causing businesses to close.”

According to the police press release, this behaviour can be construed as mischief under the Criminal Code of Canada.

The OPS added that charges and convictions related to the Freedom Convoy could lead to people being barred from crossing the Canada-US border.

Prime Minister Justin Trudeau invoked the Emergencies Act for the first time in Canadian history to provide the federal government with extra powers to manage the trucker protests across Canada.

“It is now clear that there are serious challenges to law enforcement’s ability to effectively enforce the law,” said Trudeau.

Trudeau added that the Emergencies Act would give police more power to break up public gatherings deemed illegal and dangerous, including blockades and occupations.

The RCMP, Trudeau added, can enforce municipal bylaws and provincial offences where applicable.

Liberal finance minister Chrystia Freeland said invoking the Emergencies Act meant that crowdfunding platforms would have to register with – and report large transactions to – the Financial Transactions and Reports Analysis Centre of Canada (FINTRAC).

“We are making these changes because we know these platforms are being used to support illegal blockades and illegal activity, which is damaging the Canadian economy,” said Freeland.

“The threshold for actually invoking the Emergencies Act may not have been met in this case,” said Van Geyn on “The Andrew Lawton Show” on True North on Tuesday. “While perhaps there is some evidence that the government is relying on that we don’t have access to, there’re really specific things that the act requires in order for it to be invoked.”

Van Geyn said that in order for the act to be invoked for a public order emergency, there have to be threats to Canada’s territorial integrity, espionage, and sabotage.

The Freedom Convoy entered its 25th day on Wednesday.