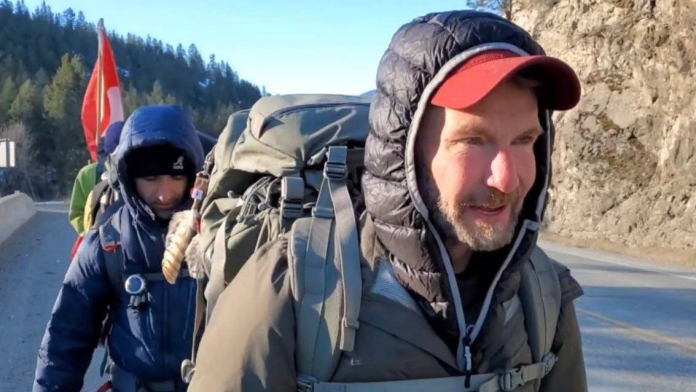 Canadian Armed Forces veteran James Topp completed the first tenth of his march from Vancouver to Ottawa on Thursday, reaching the town of Grand Forks, British Columbia as he looks ahead to crossing the Columbia and Rocky Mountains into Alberta.

“The support being offered is overwhelming, and I am thankful to everyone who reached out to me,” Topp told True North. “Many have opened their homes to me or offered donations. People have pulled over to wish me well and even marched with me for a while. It is the most amazing thing to be a part of.”

Topp also wanted to thank his support crew through the first portion of his journey, whom he described as “vital to the success of the mission so far.”

“They are Jeremy, Cristian, Dallas, Dan, Esther, and David, the owner of the RV who saw us through to Hope in the first phase of the march. There are other names I have not mentioned working super hard behind the scenes, and I am thankful to them all for making this mean something.”

Topp began his 4395-kilometre trek on Feb. 20, departing from the Terry Fox monument at Vancouver’s B.C. place in solidarity with the truckers and working Canadians to bring an end to overbearing government mandates.

The march began the same weekend that police cracked down on Ottawa convoy protesters under Prime Minister Justin Trudeau’s implementation of the Emergencies Act, an event that Topp told True North had only strengthened his resolve.

Topp said that everywhere he goes, he has heard stories from people like himself whose mental health and livelihoods have been devastated by government mandates during the pandemic.

“Everywhere I meet people, I hear their stories and the stories are amounting to an overwhelming amount of individuals suffering due to government overreach,” Topp wrote on Wednesday. “I am marching to carry these stories to Ottawa. I want to thank every person who has entrusted me with their story. It increases my resolve more and more each day.”

Topp continues to follow Highway 3 – also called the Crowsnest Highway – which skirts along B.C.’s border with the US. The route contains a number of small but historic communities including Midway and Greenwood, which has retained its historical designation as a city despite a current population of under 1000.

“On our way, we were welcomed by Baily, a health worker who was also fired from her job of serving the elderly with care after failing to comply with the mandate. She shared her story, as so many fellow Canadians have,” Topp wrote.

“On our way out of Greenville, we met John and his wife Annie who drove all the way from Victoria to meet us. John is a longtime airline pilot who is no longer working in that capacity, also due to the unjust mandate. John decided to join us in the march for the rest of the day, quite a feat on this cold day.”

Travelling across the Okanagan plateau will give Topp some flat land before he heads into the final two stretches of B.C.’s mountains, including the Columbian Mountains that serve as the western boundary of the Kootenay region. After that, Topp and his crew face the Rockies, where they will follow the Crowsnest Pass into Alberta.

“I am being realistic about hitting the mountains,” Topp told True North. “I respect the dangers that are present in the terms of weather and terrain. I am taking precautions by keeping daily distances shorter and having a safety vehicle nearby. I have people watching my back as we lean into this part of the journey.”

Topp’s progress can be followed on his website CanadaMarches.ca, which includes live GPS of his location, a blog and links to social media, as well as information for people wishing to volunteer or offer night support.