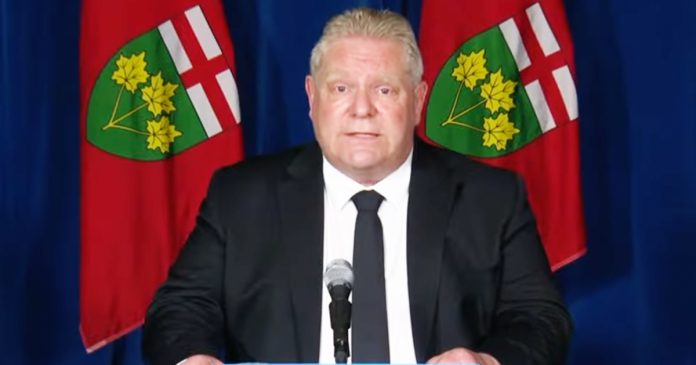 Thursday marked the second anniversary of the Ontario government first introducing restrictions aimed at containing the spread of COVID-19.

Premier Doug Ford first declared a provincial state of emergency on Mar. 17, 2020, with an order that banned gatherings of over 50 people and closed multiple businesses and services.

The order was initially meant to last for two weeks, in line with the infamous slogan “two weeks to flatten the curve” used by doctors, politicians and the media to reassure Canadians that lockdowns were intended to be brief and temporary.

However, the order was extended beyond two weeks.

The Ford government also expanded the lockdown on Mar. 24, 2020 by ordering the closure of all workplaces it deemed “non-essential.”

Ontario remained in lockdown for much of spring 2020 and only began slowly reopening businesses on May 16. Indoor facilities including gyms and cinemas only reopened on Jul. 31 2020 in Toronto and Peel region.

Ontario has since endured three more province-wide lockdowns, including the latest one in Jan. 2022 in response to the Omicron wave. This is in addition to multiple targeted regional closures.

The number and scope of these closures make the province of almost 15 million people one of the most locked down jurisdictions in North America.

In this time, Ontarians have also witnessed what some have described as assaults on civil liberties.

One of the first notable incidents involved the Aylmer Church of God in Apr. 2020.

With places of worship ordered shut, the church opted to hold drive-in services in its parking lot. Although outdoors, the activity was deemed illegal under the government’s emergency order, and police considered charging the church.

The Ontario government later amended its emergency order to allow for drive-in services.

An example of where civil disobedience was met with force occurred in Toronto during the city’s second lockdown in Nov. 2020, where Adam Skelly opened his restaurant Adamsons BBQ.

Skelly’s act of noncompliance drew huge crowds of customers and lasted for three  days. On the third day, however, Toronto Police hammered down by surrounding the building with officers and using riot horses. Police also arrested Skelly.

It should be noted that American big-box stores including Walmart and Costco were allowed to remain open during the lockdown, while small retail businesses and restaurants were required to close.

Protests were also restricted during Ontario’s numerous lockdowns, and those who organised protests that did not comply were charged.

MPP Randy Hillier was ticketed in Nov. 2020 for holding a “Pots and Pans Protest” against Ford’s lockdowns in front of the Ontario Legislature.

Arguably the most controversial of the Ford government’s lockdown policies came on Apr. 16, 2021, however, when the province opted to close outdoor recreational sites including playgrounds, ban outdoor gatherings entirely and limit interprovincial travel.

Ford also had police enforce a stay-at-home order he had imposed earlier in the month.

Ontario’s Solicitor General Sylvia Jones told Ontarians that the government had made “the deliberate decision to temporarily enhance police officers’ authority for the duration of the stay-at-home order.”

“Police will have the authority to require any individual who is not in a place of residence to first provide their purpose for not being at home, and provide their home address” she said.

Jones added that police would “also have the authority to stop a vehicle to inquire about an individual’s reason for leaving their residence.”

The announcement was met with fierce backlash from all sides of the political spectrum, as well as from police departments who said they would not participate in the enforcement of the order.

Ford ended up abandoning the controversial scheme one day later, as well as reversing course on the closure of playgrounds, which had been widely criticised by health experts.

While Thursday marked two years of provincial government restrictions, Ontario will lift its mask mandate for most settings next Monday, and all remaining COVID measures on Apr. 27.

Ford is also up for re-election this year, with a provincial election campaign expected to start in the coming weeks.

The vote is set to take place on Jun. 2.