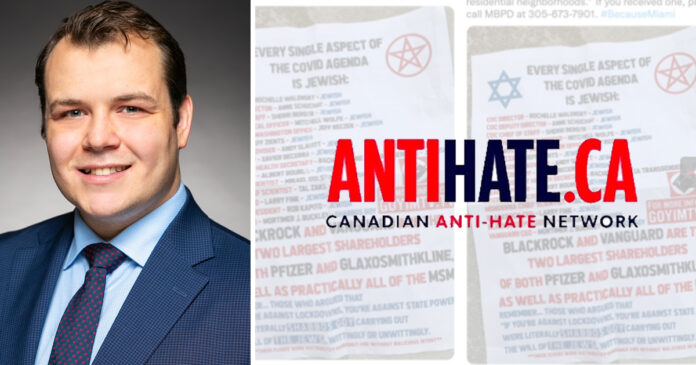 Conservative MP Dane Lloyd grilled an activist from the far-left Canadian Anti-Hate Network (CAHN) before a parliamentary committee this week, accusing the group of bias and for spreading misinformation during the Freedom Convoy.

CAHN executive director Evan Balgord admitted to the Commons public safety committee on Tuesday that his so-called research organization did not in fact verify a photo of an anti-Semitic flyer allegedly found at the site of the Freedom Convoy in Ottawa before CAHN chair Bernei Farber pinned it on convoy protesters.

The admission came during Lloyd’s questioning of Balgord.

“During the convoy protests your (chair) Bernie Farber posted a tweet with a photo of a vile antisemitic flyer and claimed that this was a picture of a flyer being circulated in Ottawa among the trucker protesters, but upon further examination it was proven that this exact same photo was taken in Miami, Florida weeks before the protest ever began,” said Lloyd.

“Can you explain why the (chair) of your organization was claiming that this photo was being circulated at the protest when in fact it was a photo from a completely different country weeks before the protest?”

Balgord explained that “(w)hat had occurred was that somebody had reached out to us in Ottawa who said that they saw that flyer there, and they provided the photo at that moment.

“Bernie was not aware that the photo itself was taken from an American source,” he continued. “What the person was trying to communicate to our organization was that they saw the same flyer but they had attached the photo from the states so it was our error in not communicating that more clearly.”

“So you have no evidence other than hearsay that that flyer was actually being distributed in Ottawa? Correct?” asked Lloyd.

“That is correct. We took the report from somebody on the ground, and our chair put the information out there,” replied Balgord.

Quillette editor Jonathan Kay was the first to debunk Farber’s Feb. 6 tweet that claimed that the photo of the flyer was “taken by a friend in Ottawa at the Occupation. Apparently in plain sight.”

Farber eventually deleted the tweet after its true source was discovered.

During his testimony, Balgord also admitted that CAHN was biased, describing it as an “anti-fascist” group.

“We wear our biases on our sleeves,” he said. “We are very proudly anti-fascist and we focus on the far right.”

Responding to the remark, Lloyd referred to the rash of church burnings last summer about which CAHN has remained silent.

“You know, I come from an area where last summer where we had a 100 year old church burnt to the ground and dozens of people had to be evacuated from an apartment building close by which nearly went up in flames and killed dozens of people, but you just don’t hear it talked about in this country, and I understand that it’s not your organization’s mandate to talk about these things,” he said.

The anti-Semitic flyer is among numerous false claims by the legacy media and politicians which were floated to paint convoy demonstrators as extremists and even domestic terrorists.

At the height of the demonstrations in Ottawa, numerous Liberal and NDP politicians including NDP leader Jagmeet Singh claimed that the protesters were responsible for an attempted arson on a residential building. The Ottawa Police Service have since debunked those assertions after arresting two suspects whom they said had no connection to the convoy protest.

CAHN has to date received a quarter-million dollars from the Trudeau government for “anti-racist” research activities under the Anti-Racism Action Program.