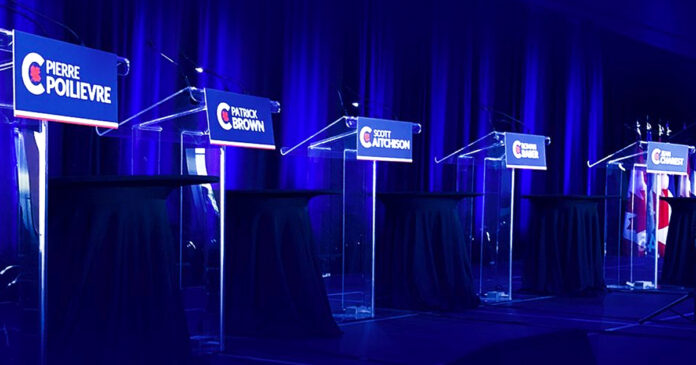 As the final leg of the Conservative leadership race begins and campaigns are given access to the party’s preliminary voters list, leadership candidates feel confident about their winning prospects.

The party shared the preliminary list of members with the campaigns, which affords candidates the opportunity to reach out to members and try to win their support or change their vote.

True North reached out to all the campaigns to ask if the candidates see a path to victory and how they think they’ll be able to pull off the win.

Leslyn Lewis’ campaign feels she is being underrated, as she was able to surprise many people in the 2020 Conservative leadership race and can surprise people again in this race.

“We definitely believe there is a path to victory for Dr. Lewis, and we will continue to work towards that end until every ballot has been cast,” said Lewis’ campaign manager Steve Outhouse.

While the campaign refused to comment on the campaign’s strategy for victory, the Haldimand-Norfolk MP has been touring the country and drawing modest audiences that are excited about her prospects of winning.

Meanwhile, the Jean Charest campaign is confident that the Conservative Party’s election points system works to their advantage.

“We’ve said all along this race comes down to vote efficiency and points. The winning point tally is 16,901, our data confirms Jean Charest is well positioned to achieve that,” said director of communications Michelle Coates Mather.

The Charest campaign claims that the vast majority of memberships sold are within less than 100 ridings – making the vote extremely concentrated.

According to the Charest campaign, the Conservatives sold 56,000 memberships in Quebec, with Charest being confident he’ll win 80% of Quebec’s support distributed across all 78 ridings.

As long as a riding has a minimum of 100 votes cast, all ridings are worth the same amount of points, and the Charest campaign believes that while they may not win the absolute most votes, they’ll win the most points.

Charest’s campaign also claimed that if he wins the leadership race, leadership contender Pierre Poilievre would have a place in the party and a role to play.

“We know conservatives win when we are united. We all agree it’s time for Trudeau and his far-left NDP-Liberal coalition to go,” said Mather.

The Scott Aitchison campaign believes that with the launch of their upcoming ‘Hope and Respect’ tour across Canada, the campaign will be able to pick up support from the 675,000 party members.

The Roman Baber campaign views the makeup of the Conservative membership optimistically, believing that Baber’s message of democracy resonated with party members.

“There is no question that our message of democracy had a material effect on all campaigns and the race as a whole,” said press secretary Celine Boumitry.

The former Ontario MPP has promoted his vision of a democratic conservatism and has fought to end pandemic measures, even proposing that chief public health officer Dr. Theresa Tam be fired.

Meanwhile, Patrick Brown’s campaign is confident of their prospects for victory as they believe they’ll win the necessary urban ridings to win and have good down-ballot support.

“Absolutely [Brown] sees a path to victory. Patrick sold 150,000 memberships, by far the most by any candidate in any previous Conservative leadership,” said spokesperson Chisholm Pothier.

Brown recently told CBC News that he would consider running for re-election in Brampton if it looks like he will lose to Poilievre in September.

Of all the campaigns, the Pierre Poilevre campaign refused to comment.