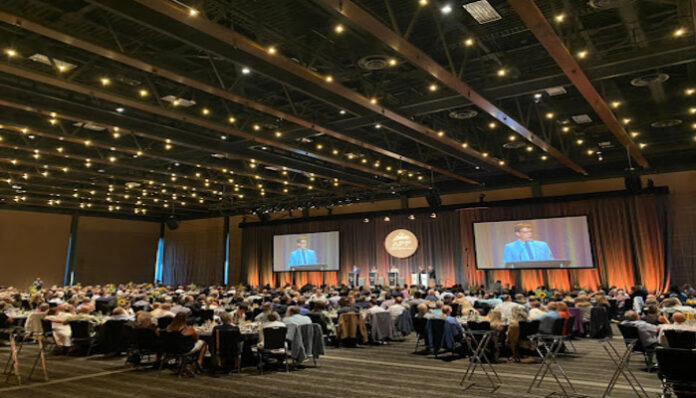 Danielle Smith was the only candidate in attendance who said biological men should be allowed to participate in women’s sports in some instances.

Smith suggested testing testosterone levels to determine if a biological male who’s transitioned should be allowed to participate in women’s sports. Some women have very high testosterone levels and there could be another category altogether, Smith continued.

The frontrunner also said she has a non-binary family member.

“We shouldn’t be making any child feel (that) issues they’re struggling with are political football,” Smith said.

Levant said candidates that dropped out “panicked” when CBC News called them with a “gotcha” story. Candidates running to be Premier must show a willingness to engage with people with different views, he said.

During the event, all candidates agreed the federal government superseded its authority when it used Section 1 of the Canadian Charter to mandate Covid-19 vaccines.

Section 1 was misused, people lost their jobs over the vaccine mandate and the government created needless division, Loewen said.

“The government has taken advantage of that situation,” he said. “And we need to close that door to make sure it doesn’t happen again.”

Jean said the pandemic has shown Albertans their rights and freedoms are “an illusion” which exist only if the government doesn’t supersede those rights. He promised to amend the Alberta Health Act so it can’t overrule Albertans’ rights again, saying “we can get that done.”

Smith said “everyone let us down” during Covid — the House of Commons, the Senate, the media and health officials. The Alberta government must be the last defense against Ottawa, she said.

“Governments don’t grant rights,” she said. “You are granted those rights by virtue of being human.”

The Former Opposition Wildrose leader received a standing ovation for promising to fire the board of Alberta Health Services (AHS), if elected.

Jean disagreed, saying AHS tried and got it wrong. As the crowd began to boo, Jean pointed out that Smith recently received an endorsement from Immigration Minister Kaycee Madu who was the Justice Minister when pastors were being jailed in Alberta.

Loewen took a shot at Smith during a discussion on taxes. He said a provincial sales tax is unnecessary — and that he’s never even “thought” about implementing one. Smith came under fire earlier in the campaign for a September 2020 op-ed in which she advocated for $5 billion in new taxes through a provincial sales tax.

Smith has been targeted by her opponents in all leadership debates, with recent polls placing her ahead of the pack.

The forum was also shrouded by attacks from candidate Leela Aheer, who accused participants of being responsible for “white supremacy, homophobia and racism.”

The APP clapped back in a statement, saying she’s following in the footsteps of Premier Jason Kenney — and that she’s likely to lose her seat in the next election.

“Both Ms. Aheer and Mr. Kenney have failed to understand that their poor performance, lack of integrity, lying, and spineless failure to stand up for Albertans have been at the root of the APP movement,” Modry wrote.

The next official leaders’ debate will be held on August 30 in Edmonton. UCP members will elect a new leader and Premier on October 6.