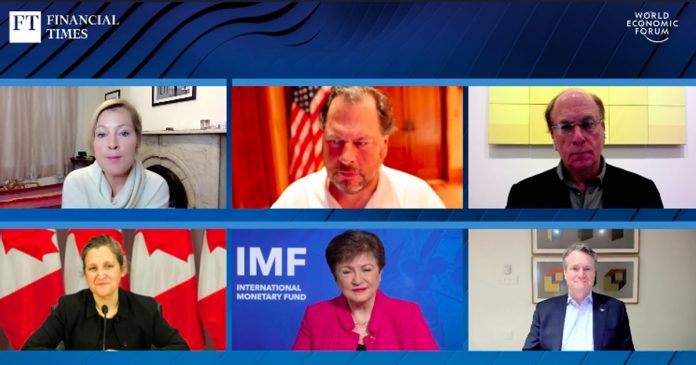 Speaking on a panel at the World Economic Forum’s Davos Agenda, Deputy Prime Minister Chrystia Freeland said her government was given a mandate for its carbon tax during the last election.

“Our government has put a price on pollution across the country, a carbon price. We fought the 2019 election on that decision, and we were re-elected,” Freeland said.

“We really believe we do have a national mandate to move forward.”

Freeland was appearing on a stakeholder relations panel at the virtual summit, which aims to kick off the World Economic Forum’s Great Reset Initiative.

While the Liberals were re-elected after implementing the carbon tax, Freeland neglected to mention the government’s December expansion of it, despite previous claims that it would not increase.

This was pointed out in a tweet by Canadian Taxpayers Federation federal director Aaron Wudrick.

“Fought the election on it?” he said. “They explicitly said they weren’t going to increase it, then after the election announced an increase.”

Freeland went on to explain that in December the Liberal government put in place an “ambitious plan” to meet and exceed the 2030 targets set by the Paris Accord. The Supreme Court has yet to rule on whether the carbon tax is constitutional.

During the panel discussion, Freeland said the key to balancing green targets and social inclusion is to build a green agenda. She also talked about the potential for job creation with sustainable retrofits to homes, building electric car charging ports and the Liberals’ pledge to plant two billion trees.

“These are three concrete examples of how Canada intends to build a green agenda into a recovery and jobs agenda,” said Freeland.

What Freeland omitted from her answers was the direct cost to taxpayers the carbon tax would incur, and how the rebates failed to offer any significant return.