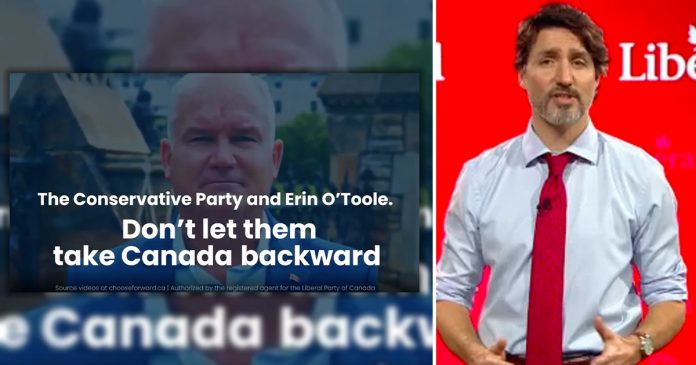 The ad, which was shared by the party’s official Twitter account, misled Canadians on three of O’Toole’s actual positions and instead relied on misrepresenting O’Toole’s views to provoke fear.

In the video, the Liberals present three misleading claims about the Conservative leader. The claims are that Erin O’Toole wants to make Canada’s healthcare private and for-profit, that the Conservatives want to push anti-abortion laws and that O’Toole denies climate change.

Each of these claims is verifiably false and a misrepresentation of O’Toole’s actual stated positions.

On healthcare, O’Toole has repeatedly stressed the importance of Canada’s universal healthcare system. For some time now, the Liberals have been floating a heavily edited video of the Conservative leader discussing private healthcare options for Canadians.

Despite the fact that Twitter flagged the clip, which was posted by Liberal Party Candidate Chrystia Freeland, as “manipulated media” the Liberals have continued to use the doctored clip as evidence that O’Toole secretly wants to make all healthcare private in Canada.

“We need to ensure universal access remains paramount,” O’Toole said in an omitted portion of the video.

With regard to O’Toole’s position on abortion, the Conservative Party leader has repeatedly expressed pro-choice views which are backed by his voting record.

“Let me be perfectly clear. As a pro-choice leader of this party, I will make sure that we defend the rights of women to make the choice for themselves with respect to their own health. We will make sure abortion services are available from one ocean to the other,” O’Toole reiterated his pro-choice position in August.

As for O’Toole’s views on climate change, the Conservative Party leader has been adamant that those running for the party support his platform including its extensive climate change policies.

Since becoming leader of the party, O’Toole has pledged to maintain a carbon tax in partnership with Canada’s provinces and has pledged to meet the Paris agreement targets.

“Canada must not ignore the reality of climate change,” said O’Toole in April.