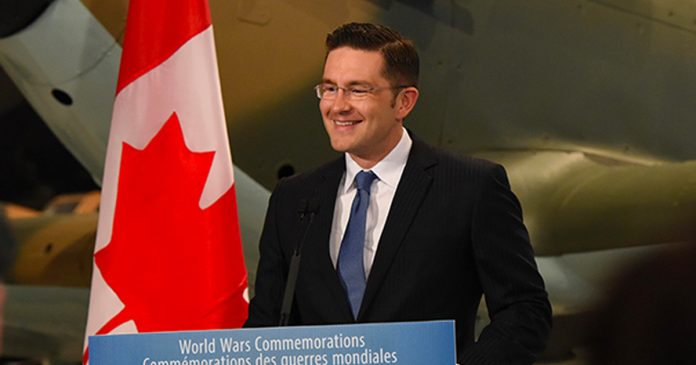 “This government overreach is the direct result of Trudeau’s hateful demagoguery, targeting a minority to divide and distract from his own failures,” Conservative MP Pierre Poilievre said in a tweet on Thursday.

Poilievre referenced a video clip that had resurfaced of Prime Minister Justin Trudeau demonizing Canadians who haven’t taken the COVID shots as “misogynists and racists.” Trudeau’s comments have been condemned internationally.

Poilievre is the most prominent Conservative MP to stand against Quebec’s move to make vaccination mandatory. In speaking out against the policy, he echoed earlier statements by Conservative MPs Michael Cooper, Garnett Genuis and Jeremy Patzer.

“A tax on the unvaxxed would be legally and ethically wrong. Full stop,” Lantsman said in a Tweet.

Poilievre and Lantsman’s remarks come two days after Quebec Premier François Legault announced his government would be exacting “health-care contributions” from Quebeckers who choose not to get the COVID shots.

The Canadian Taxpayers Federation (CTF) came out swinging against the new fee being imposed on Quebeckers and warned that forced vaccine taxes are the wrong way to go.

“We’re not going to tax our way out of a pandemic, so it’s great to see the Conservatives speaking out against this tax,” said Terrazzano. “Canadians are already overtaxed, and this could open the floodgates to a bunch of new taxes.”

“Some politicians want the unvaccinated to pay more today. But who are they going to go after tomorrow? All Canadians need to unite against this tax.”

Conservative leader Erin O’Toole mentioned the issue during a Facebook Live video later on Thursday but was less definitive in his opposition.

“I don’t like to see measures like we’re seeing in Quebec where the provinces don’t have the tools to manage COVID, going to tax people that are unvaccinated,” O’Toole said.

On the provincial front, Alberta Premier Jason Kenney, Saskatchewan Premier Scott Moe and Ontario Premier Doug Ford have all said “no” to forcing vaccines on their citizens under threat of financial penalties.

British Columbia’s health minister Adrian Dix also said no to forcing the shots onto people who don’t want them.

“I can say definitively we will not be proceeding with a similar measure,” Dix told a press conference on Tuesday.

Premiers in Atlantic Canada have not ruled it out but say there are no plans yet.

The government of Quebec has not yet announced how much the financial punishment will be for those who haven’t taken the COVID shots, or when the fees will start being charged.

Quebec is only the second government in the western world to make COVID shots compulsory for all adults. Austria is scheduled to begin the policy in February, with fines of up to $4000 every three months for people unwilling to get the shots.