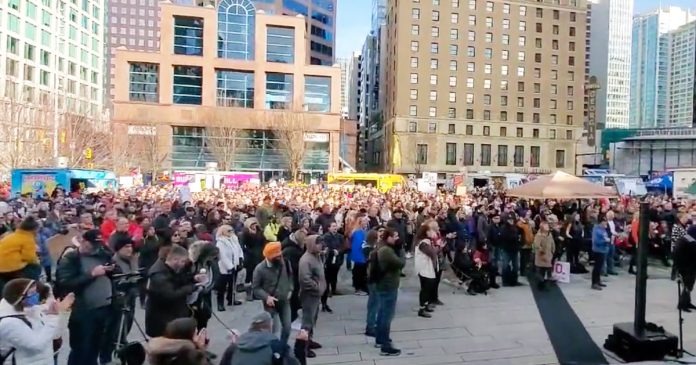 Canadians gathered by the thousands in various cities on Saturday to voice their opposition to lockdown measures, vaccine passports and mandatory COVID-19 shots.

The Worldwide Freedom Rally was held in solidarity with cities around the world. Protests took place at dozens of urban centres including Toronto, Vancouver, Calgary, Montreal and Fredericton.

In the streets of downtown Toronto, protestors waved Canadian flags and held signs with statements such as “Unvaxxed are not sick!” and “Compliance isn’t science.”

People’s Party of Canada leader Maxime Bernier was among thousands who stopped to gather at Queen’s Park. Speaking to the crowd, Bernier said he has been voicing his opposition to heavy-handed government measures since the start of the COVID-19 pandemic and that “when tyranny becomes law, revolution becomes our duty.”

“And now we have that ideological revolution, that freedom revolution, here in Canada,” said Bernier. “We are winning that battle because truth will always win.”

He led the crowd in a chant of “freedom!”

Some protesters held Canadian and “F*ck Trudeau” flags as they walked through downtown. Others carried signs with statements such as “We will not comply” and “We want our freedom.”

In Montreal, a large number of people attended the freedom rally at La Fontaine Park.

Protestors waved Canadian and Quebec flags as they walked through Old Montreal. Some of them brought signs with statements such as “No vax pass!” and “We want choice.”

Protestors chanted “Freedom now!” and blew whistles. They concluded their protest by walking to the George-Etienne Cartier Monument.

In recent weeks, governments across Canada have reimplemented strict lockdowns in order to curb the spread of the Omicron variant.

In Quebec, the government reinstated a curfew and pledged to tax those who choose to remain unvaccinated. In Ontario, the government has extended the use of mask mandates and vaccine passports indefinitely. New Brunswick has returned to a Level 3 lockdown, the most restrictive level of the government’s “COVID alert system.”

The rallies also served as the unofficial launch for a massive convoy of truckers who began heading to Ottawa on Sunday to protest vaccine mandates and an erosion of freedoms under COVID-19. A GoFundMe campaign for the “Freedom Convoy 2022” had raised almost $2 million as of Saturday evening.