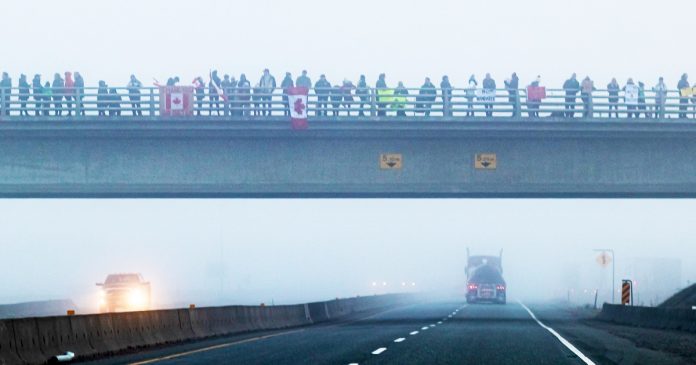 It is clear that the legacy media is blind to radicalism on one hand and obsessed with extremism on the other. They apply few if any criticisms to their coverage of left-wing protests but treat a movement of conservative-minded Canadians as racists who shouldn’t be welcome in polite society.

Nowhere has this been more obvious than with the media’s coverage of the grassroots Truckers for Freedom Convoy currently making its way to Ottawa.

Liberal-minded journalists and columnists have come out in droves to malign the tens of thousands of truckers opposed to unconscionable vaccine mandates and erosions of freedoms, calling them bigoted, evil and even domestic terrorists.

Comparisons to the Jan. 6 US Capitol riots have been their favourite, fear-mongering go-to message, part of an effort to convince everyday Canadians to see their fellow citizens as monsters.

Varied outlets have deployed these smears in lockstep with one another. Global News, CBC News, National Observer and the Toronto Star have all engaged in the same unified spin – demonizing convoy truckers and Canadians fighting for freedoms as enemies of all.

And yet when it came to the various left-wing-inspired demonstrations targeting Canada’s critical infrastructure in the past few years, the same sort of vehemence toward protestors was nonexistent.

When in 2020 far-left provocateurs were illegally blockading roads and bridges and lighting train tracks on fire, the mainstream media didn’t once compare them to terrorists. Such comparisons would even have been warranted, since there were plenty of arrests and criminal charges laid as these so-called protests held the nation hostage. Instead, reports from the press waxed poetic about the justice of the movement, avoiding any concerns about further violence.

The mainstream media’s double standard is also on display with the most recent iteration of left-wing protests targeting the BC LNG pipeline.

For example, Global News reporters wrote in one-sided reports about Edmontonians marching “in solidarity” against the project, while Londoners were out “in support” with the so-called Wet’suwet’en protestors.

Truckers, workers and their supporters who defend their jobs and liberties are not afforded the same sympathy, instead being branded as “white nationalists” or “far-right.”

As for CBC News, the state broadcaster jumped on board with other media outlets accusing the freedom convoy of being extremists.

Meanwhile, the top brass at CBC are seemingly fine with partnering with radical anarchist Franklin López to produce a one-sided “viewpoint documentary” about the BC LNG pipelines – supporting protests that have led to equipment sabotage and workers being stranded without food.

López is an individual who has published such videos as “Oil Pipelines Are Easy to Shut Down” and “How to Paralyze a Country,” videos that have found their way onto extremist anarchist websites that call for violence and celebrate criminal activities across the country.

The fact is, overblown claims of extremism about the convoy arose from the media itself. Their claims are propped up by anti-hate activists touted as “experts” – people whose careers profit from maligning freedom-oriented Canadians as racist and hateful.

As much as the legacy media tries to spin the Freedom Convoy as a radical uprising, and to paint Prime Minister Justin Trudeau as a figure beset by extremists, the message is not catching on. People around the world are siding with the convoy.

Among the hundreds of thousands who support Canada’s freedom movement are billionaire Elon Musk, podcaster Joe Rogan and actor Rob Schneider. And those are only the ones who have made it public.

Although the media will likely try to inflate a few bad actors, journalists need to be reminded of something once again – something Conservative MP Pierre Poilievre put so succinctly on Thursday morning –  that these truckers “have kept all of you alive for the last two years by filling your grocery shelves with the food that you eat and filling your homes with the products that you rely upon.”