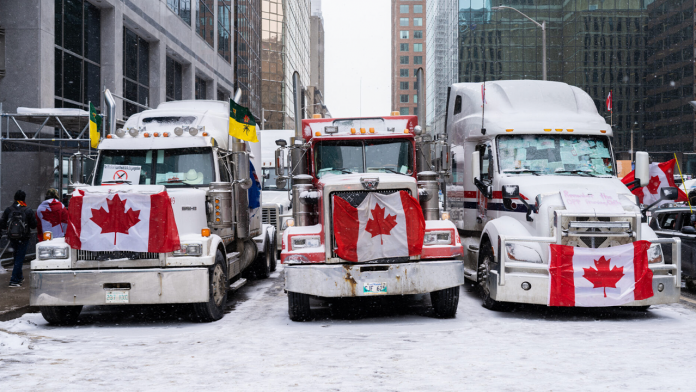 According to new Access to Information records obtained by Blacklock’s Reporter, police created a list of fundraisers linked to the Freedom Convoy. Names and credit ratings were sent to Farm Credit Canada (FCC), a federal bank.

Internal emails from the FCC show that a list was sent to them by Ottawa Police on February 18.

“FCC has received a list of names from the Ottawa Police Service in relation to a restraint order for the funds raised through the GiveSendGo crowdfunding platform for the Freedom Convoy,” said in a staff email.

“This information was originally provided directly to Farm Credit Canada from the Ottawa Police and then we subsequently received more information through our membership with the Canadian Bankers Association,” said the email.

It is unclear why the Ottawa Police sent the FCC the list of convoy fundraisers or what action the federal bank took upon receipt of the names.

In another internal document, it was revealed that the FCC was instructing its employees to record the names of customers who supported the convoy and FCC chief operating officer Sophie Perreault warned that customers would face “appropriate action” if they were deemed supportive of the convoy.

“Any individual and entities that have been verified by the authorities as participating in illegal activity under the Act will face appropriate action which will include not onboarding those found to violate the Act, freezing disbursements and assessing the need to terminate business relationships,” Perrault wrote in an email.

Organizers of the Freedom Convoy received a total of $10.1 million in donations through GoFundMe. The account was frozen on February 4.

Another $10.6 million was raised through a second platform, GiveSendGo. A Supreme Court order froze the GiveSendGo account on February 11 through the Government of Ontario.

The Trudeau cabinet claimed that “foreign extremists” were using the crowdfunding platforms to help finance the convoy. ​​However, executives from GoFundMe and GiveSendGo refuted the government’s claim and said the convoy was funded primarily by Canadians.

“Our records show 88 percent of donated funds originated in Canada,” said Juan Benitez, president of GoFundMe, who testified before the Commons public safety committee on March 3.

GiveSendGo executives testified that about 63% of those contributions were from Canada.

“Most of the donations were under a hundred dollars,” said GiveSendGo co-founder Jacob Wells. “It’s pretty consistent across the board.”

More than 200 bank accounts worth nearly $8 million were frozen as a result of the invocation of the Emergencies Act from February 14 to 23.