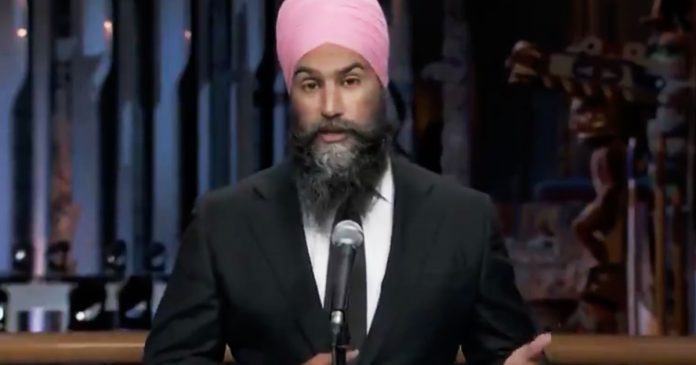 NDP Leader Jagmeet Singh is unlikely to pull out of his party’s coalition deal with the Trudeau Liberals if the Public Order Emergency Commission (POEC) rules the government’s use of the Emergencies Act to quash the peaceful Freedom Convoy was not justified.

Speaking to CTV’s Question Period, Singh said, “simply because it was the wrong decision wouldn’t be enough for us to break, or to force the country into an election.”

“We’ve always said we want to get to the bottom of if it was the only option, if there was other options, if there were better approaches that could have been taken. And we completely support a full and transparent investigation into that,” Singh said.

In March, Prime Minister Justin Trudeau and Singh formed a coalition deal, which would see the NDP support the Liberal government until 2025 in exchange for addressing their key priorities such as national pharmacare and dental care.

Commissioner Paul Rouleau will provide a report to Parliament by Feb. 20.

Since the POEC hearings began in October, a number of revelations have been made that counter the government’s justification for the never-before-used act.

Ontario Provincial Police (OPP) intelligence officer Pat Morris confirmed that there was no intelligence that indicated the Freedom Convoy met the legal threshold required for the federal government to invoke the Emergencies Act.

In addition, OPP Chief Superintendent Carson Pardy told Commission lawyers that the Emergencies Act invocation wasn’t required to tow vehicles and that existing police strategies in place prior to invoking the act would have been sufficient to clear the protests within the same time period.

Further, acting Deputy Chief of Ottawa Police Service (OPS) Patricia Ferguson testified that tow trucks were already on their way to assist in the clearing of downtown Ottawa prior to the invocation of the Emergencies Act.

Singh has made a number of claims about the Freedom Convoy that have since been called into question, including falsely accusing the convoy of attempting to burn down a downtown Ottawa apartment. The OPS revealed that the accused in that incident had nothing to do with the Freedom Convoy protests.

Singh was the first to introduce the false accusation to the official record of the House of Commons when he pointed to the incident as an “example” of the so-called commonplace violence at the protests.