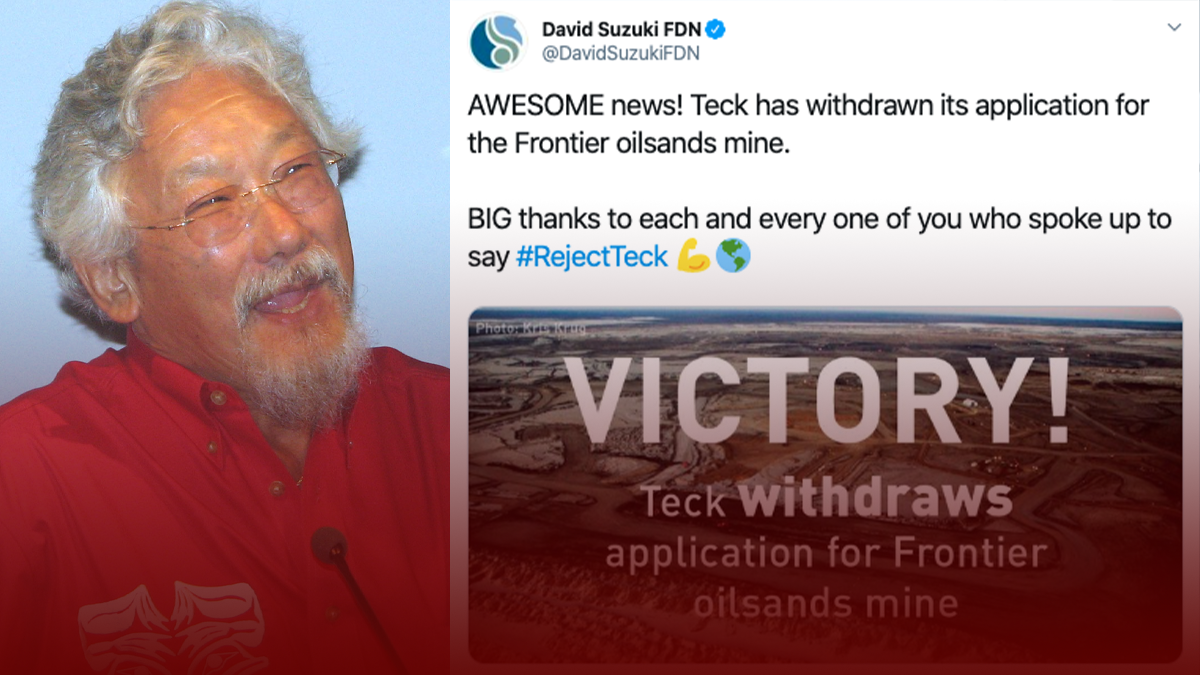 The David Suzuki Foundation celebrated the loss of thousands of potential jobs in Alberta after Teck Resources Ltd withdrew its bid for the Frontier oil sands mine on Sunday.

Less than a day after Teck pulled its application for the project, the David Suzuki Foundation’s official Twitter account declared “victory.”

The company will be filing a $1.13-billion writedown on the $20 billion project and cited the need to reconcile resource development projects with climate change.

“Global capital markets are changing rapidly and investors and customers are increasingly looking for jurisdictions to have a framework in place that reconciles resource development and climate change, in order to produce the cleanest possible products,” said a statement by Teck President and CEO Don Lindsay.

“This does not yet exist here today and, unfortunately, the growing debate around this issue has placed Frontier and our company squarely at the nexus of much broader issues that need to be resolved.”

According to estimates, the project would have contributed a total of $70 billion in tax revenues to the Canadian economy.

During the construction phase, Teck Frontier was expecting to hire 7,000 people and then another 2,500 employees to operate the mine.

The mine also had the support of 14 First Nations in the area and had passed through all necessary regulatory and consultation hoops. The federal government was expected to make a final decision on the project by the end of February.

According to senior Liberal sources, the Trudeau government was preparing an aid package for Alberta in the case of a rejection.

Premier Jason Kenney warned Trudeau that a rejection of the mine could lead to a “boiling point” in Western alienation.

“There is quite simply, no reason specific to this project that would justify denying federal cabinet approval for the Frontier project,” wrote Kenney at the time.

Kenney has since called the decision by Teck to withdraw their application “a grave disappointment.”

“The factors that led to today’s decision further weaken national unity. The Government of Alberta agreed to every request and condition raised by the federal government for approving the Frontier project, including protecting bison and caribou habitat, regulation of oilsands emissions and securing full Indigenous support,” wrote Kenney.