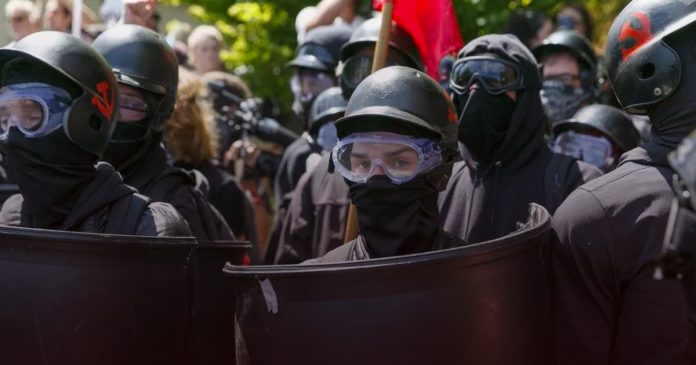 It’s been a year since Canada was nearly brought to a standstill by illegal rail blockades and the issue of anarchist violence has yet to be seriously addressed by our political elite.

Last January, peaceful protests in support of hereditary Wet’suwet’en chiefs were derailed by a handful of far-left extremists willing to use criminal means to achieve their political goals.

Reports from the time detailed how some radical activists lit fires underneath incoming trains, attempted to arrest the premier of British Columbia at his home and even aroused suspicions in Quebec that AK-47s were present at the blockades.

Meanwhile, anarchist websites which still remain active today, openly published instructions on how to create Molotov cocktails and how to use the highly flammable industrial material thermite to attack critical infrastructure.

Skip ahead only a few short months later, Canada was once again threatened by anarchist violence dresed in the garb of last Spring’s anti-racist protests which began in response to the US killing of George Floyd at the hands of police.

While the protests did not reach the same deadly and fiery conclusions as those south of the border, some extremists clearly saw it as an opportunity to import far-left violence into Canada.

One Black Lives Matter inspired protest in Montreal resulted in a handful of far-left radicals looting local small businesses and attacking police, eventually prompting other businesses in Toronto and Vancouver to board their storefronts in anticipation of further protests.

Following the looting and violence in Quebec, another anarchist website published a screed to supporters stating that looting Canadian businesses was legitimate “because everyone should have nice things.”

In the case of the rail blockades, to most observers, it was clear that these were the actions of few political extremists trying to hold the country hostage. In fact, an Ipsos poll on the issue found that an overwhelming 61% of Canadians thought the criminal blockades were unjustified.

If that’s the case, why has the federal government refused to denounce domestic terrorism coming from the extreme left?

At the time, when I asked Public Safety about anarchist websites calling for violence against police officers, I was told that they do not “investigate movements or ideologies.”

Except just today as the House of Commons returned, parliamentarians voted to call on the federal government to list the notorious alt-right group the Proud Boys as a terrorist entity and to further clamp down on far-right extremism.

Clearly, if the political will is there, our government can act quickly and decisively to protect our citizens from the threat of radicalism on both sides. Yet on the issue of far-left violence and extremism, the political will has been either non-existent or is being actively suppressed.

In truth, the Canadian intelligence and security establishment is well aware of the threat anarchist extremists pose to our national security.

According to the Canadian Security Intelligence Service’s Public Report 2019, anarchist violence is listed as an example of ideologically motivated violent extremism alongside ethno-nationalist violence, the incel movement and anti-LGBTQ violence.

Similarly in the US, the White House has taken recent steps to list the amorphous anarchist group Antifa as a designated terrorist entity, while the Federal Bureau of Investigation has even gone as far as charging two women with terrorist activities after they were recorded attempting to derail a train close to the Canadian border.

For any reasonable government, these developments should be concerning enough to at least prompt further investigation, except this is not the case in Ottawa.

Instead of addressing the real and well-documented threat that anarchist violence poses, the federal government continues to sit on its hands waiting around for the next time Canada might be brought to its knees by a few radicals.