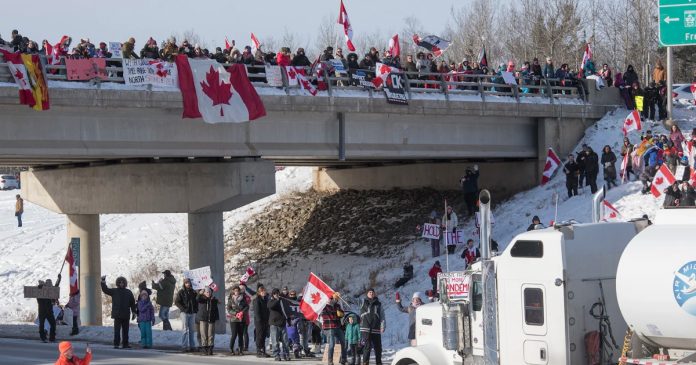 2022 was a major year for Canadians. It was a year full of protests, global conflict and political leadership changeups.

Domestically, Canada saw some delayed easing of Covid-19 mandates and restrictions as the rest of the world moved quicker to open up.

Prime Minister Justin Trudeau also faced some of his biggest challenges yet – including the nationwide Freedom Convoy protest movement.

On the world stage Russia’s invasion of Ukraine set the world into disarray.

These are the top 10 most influential stories of 2022 and what they might mean for the upcoming year.

In a major attempt to shake up the federal-provincial balance of power, Alberta Premier Danielle Smith’s government passed the Sovereignty Act on Dec. 8 – ten days after the law was tabled.

Smith promised during her campaign to replace outgoing premier Jason Kenney that she would use the legislation to reinforce Alberta’s jurisdiction over things like policing and managing its own natural resources.

The federal government has indicated that they would challenge the law on constitutional grounds setting up a possible showdown between Alberta and Ottawa in 2023.

Ultimately, whether Alberta continues its fight with the federal government is largely dependent on the outcome of the 2023 provincial election as NDP leader and Smith’s main opponent, Rachel Notley, has called on the Trudeau government to revoke the act should it become law.

Trudeau’s invocation of the Emergencies Act and its aftermath

On Feb. 14, Prime Minister Justin Trudeau invoked the Emergencies Act to quash peaceful Freedom Convoy protestors who had set up in the nation’s capital for weeks to demonstrate against federal Covid-19 mandates.

What began as a protest movement by truckers opposed to a cross-border vaccination requirement ballooned into a nation-wide movement that ultimately ended with federal, provincial and local police authorities arresting demonstrators en masse.

The Liberal government’s use of the law, which allowed police to freeze the bank accounts of protesters and their sympathizers led to international condemnation of Trudeau including while he was present in the European Parliament.

As required by law, the federal government commenced the Public Order Emergencies Commission to investigate whether the conditions required to declare an emergency were met. Commissioner Paul Rouleau’s findings are expected to be presented in February 2023.

Carleton MP Pierre Poilievre was elected leader of the federal Conservatives on Sept. 10 in a sweeping victory that saw him take 68% of the vote on the first ballot.

Poillievre’s election was seen by many as a break from the progressive side of the party. Throughout the campaign, Poilievre maintained his support for Freedom Convoy protestors which saw him face many attacks from the legacy media and the Liberals.

As the year closes, polls show the Conservatives maintain a slight lead over the governing Liberals. Without an election scheduled until 2025, however, Poilievre has a long path ahead of him to woo voters.

After taking over Twitter as the company’s CEO in April, Elon Musk has indicated on several occasions that he’s opposed to the Liberal government’s internet regulation law, Bill C-11.

Most recently, Musk said in response to a tweet by True North fellow Andrew Lawton that Bill C-11 and other laws are an attempt to “muzzle” Canadians.

Musk’s ardent free speech approach to running the platform has prompted both Canadian politicians and journalists to express outrage over the changes at Twitter.

Although Musk has expressed interest in handing off the CEO position to a successor, as Bill C-11 reaches the final stages of the legislative process, social media companies will continue to ramp up their opposition to the regulatory scheme.

Canadians gathered across Canada to mourn the passing of Queen Elizabeth II earlier this year.

At the age of 96 and while surrounded by her family the late Queen was declared dead on Sept. 8, 2022. With her passing, King Charles III immediately assumed the throne.

Canadian Prime Minister Justin Trudeau and other prominent current and former politicians attended the state funeral of the late queen soon after her passing.

In May 2023, King Charles III will hold his coronation alongside the Queen Consort. Additionally, Canadians can expect the printing of a new currency bearing the monarch’s portrait next year.

On Feb. 24, Russian troops crossed the border into Ukraine. The war has had repercussions on Canada’s supply chain including making the cost of fertilizer even more unaffordable.

Canada responded to the invasion by issuing major sanctions against Russia and even closing the country’s airspace to Russian planes.

Some Canadians also jumped at the opportunity to serve on the front-lines of the war. As exclusively reported by True North, the Honorary Consulate of Ukraine in Vancouver indicated thousands had expressed interest in joining the country’s volunteer legion.

Without any sign that hostilities will end, Canadians can expect to see further global disruptions as a result of the Russia-Ukraine war. Canada will also face further pressure to expand its natural resource development to offset the world’s reliance on Russian oil and gas.

Nation-wide discussion about assisted suicide reached a heightened level this fall after it was revealed that several veterans, including a paralympic athlete were offered doctor-assisted suicide by Veterans Affairs.

In August it was first reported that an official with the department had inappropriately suggested assisted suicide to a veteran seeking mental health treatment.

Veteran Affairs eventually acknowledged the mishap and apologized, however, during testimony before the Senate, veteran Christine Gauthier explained how she was told to seek assisted suicide also when requesting a chair lift in her home.

The debacle has drawn international criticism and forced Prime Minister Justin Trudeau to halt further \opening up further access to assisted suicide to those with mental health issues.

In June, the federal government officially lifted its vaccine requirement for domestic and international travel.

After nearly a year of banning millions of Canadians from boarding a plane or train, the Liberal government rescinded the policy due to pressures from the travel industry.

On top of that the Liberal government also walked back on mandating the use of the ArriveCAN application for travel, which many blamed for severe airport delays across the country.

When reversing the policies, the Liberals left room for a potential return to mandates should the pandemic situation worsen. Since the pandemic has not been declared over by global health authorities, the federal government could still employ new measures to fight any future spread of Covid-19.

Throughout his campaign, Sim presented himself as the law and order candidate, promising to hire 100 additional police officers to combat surges in crime in the city. During his first few months in the position, Sim approved a motion to require police to wear body cams by 2025.

When news broke that a teacher at Oakville Trafalgar Highschool wore oversized prosthetic breasts to class, it became an international sensation.

The teacher’s antics led to several protests outside of the school, with students expressing discomfort about the teacher’s presence.

As for administrators, the Hamilton Wentworth School District has stood by the teacher, even giving them a full-time security detail. The Ontario government has since asked education ministry authorities to review dress codes for staff as a result of the incident.